My Battle With Polio: The Story of Chava Willig Levy 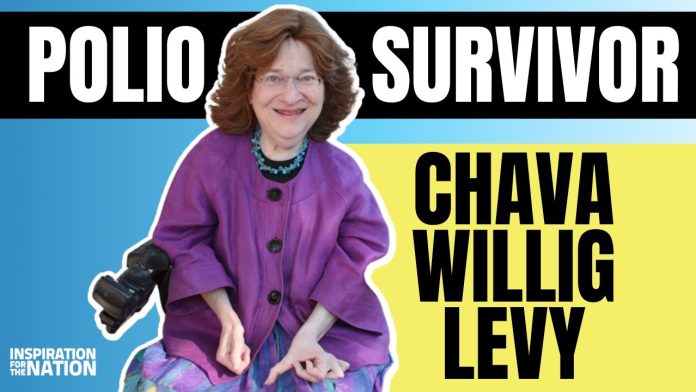 Chava Willig Levy was three and a half years old when poliovirus invaded her life. Vacationing with her family in the idyllic Catskills during the summer of 1955, she suddenly developed a high fever and weakness, rendering her unable to stand. After rushing her to the hospital, her family received the devastating news that all families of that generation feared: Their precious Chavale had polio.

Chava spent the next few months hospitalized with the support of an iron lung. Ultimately although she could breathe on her own, she was left paralyzed from the neck down. Today she navigates life in a motorized wheelchair. “My current accommodations include a ceiling lift that transfers me to and from my motorized wheelchair and a ventilator used for about 14 hours a day, so that my overworked breathing muscles can rest. I need assistance to get dressed, go to the bathroom and bathe. I use dictation software to type. If I may say so, I’m a really good cook, but my helper becomes my arms and my partner in the kitchen.”

It’s easy to think that someone disabled by a vaccine-preventable disease might be bitter that a prevention exists now. However, Chava’s trademark resilience and Ahavas Yisrael leave no room for such negativity. “As I shared in my video, ‘Welcome to My World,’ produced in collaboration with the Jewish Orthodox Women’s Medical Association (JOWMA), the polio vaccine is nothing short of a neis min hashamayim. It’s safe. It’s effective. But the polio virus still exists, as we learned when an unvaccinated young adult in Rockland County contracted paralytic polio in June — the first such case of polio in the United States in nearly a decade. The polio vaccine doesn’t make the polio virus disappear; it prevents people from getting sick with polio.” On Yaakov Langer’s podcast Inspiration for the Nation, Chava describes the effect polio has had in her life. “Finally when I was nine, I got the chance to go to school. I was thrilled… however, it turned out that I would be in a single room with a group of kids who all had mobility impairment. Some of those kids were also intellectually disabled. We weren’t even allowed to eat lunch in the cafeteria. It was complete segregation.” As a result, Chava became an advocate for disability rights and has dedicated her life to speaking out against discrimination and stigma of disabilities in the frum world. Now a mother and grandmother, she relates the incredible hashgacha of meeting her husband and the many ways she continues to see Hashem’s hand in everyday life.