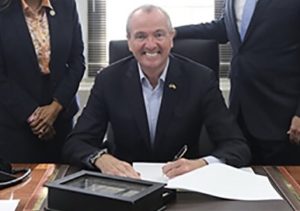 On Sunday afternoon, New Jersey Governor Phil Murphy begrudgingly signed the $38.7 billion budget passed by the Legislature which he fought vehemently against, nearly bringing the state government to a shutdown. In remarks made at the signing ceremony, Murphy said he took issue with many parts of the budget, but it was not worth shutting down the government in fighting for some of his spending priorities.

The $38.7 billion Fiscal Year 2020 budget represents a 3% increase in spending over last year’s budget, and does not include a millionaire’s tax, which Murphy has vowed to get passed. The governor said he was disappointed that the budget did not include his proposed tax on millionaire’s and corporations, which he said would have helped in his fight to achieve “tax fairness.”

Murphy also said he would be using his power as governor to line-item veto $48.5 million from the budget. He also issued an executive order withholding another $235 million from being spent until certain savings projections are realized.

Murphy does not have the ability to add any spending to the budget, so the $30 million in aid to Lakewood schools slashed by the Legislature will remain omitted from the budget. Lakewood’s School District is suing in court for the funds to be provided.

Murphy’s press conference at the budget signing had a victorious feel to it, even thought the governor had clearly capitulated to his fellow Democrats in the Legislature. This didn’t go over well with everyone. Senate President Stephen Sweeney even compared him to every Democrats chief nemesis, Donald Trump. Referring to the budget signing, Sweeney said “This actually reminds me of Donald Trump. He declares victory when he doesn’t get his way.”

Sweeney’s comments demonstrate that even with Murphy signing the budget, the infighting in New Jersey’s Democratic party will continue unabated for the foreseeable future.