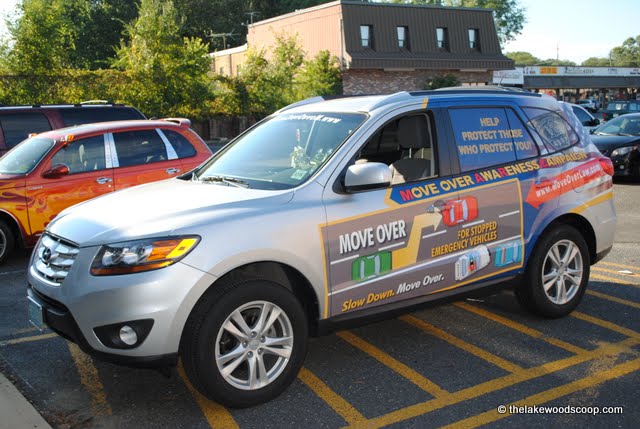 PHOTOS: If you see a car fully wrapped with safety graphics on the highway, you’re probably looking at Donna Setaro’s car. A car fully decorated with graphics is part of the Moveover AwaReness Campaign, dubbed MARC, in memory of Trooper Marc Castellano, who was killed after being hit by a car on the side of the I-195.

The program is an education campaign Ms. Setaro, Marc’s mother, embarked on along with the State Police in order to increase awareness of New Jersey’s Move Over Law.

Trooper Castellano was struck by the car while searching for a suspected carjacker in 2010.

New Jersey’s Move Over Law, enacted in 2009, is as follows: move over a lane when you see a flashing light on the side of the road for police, first aid, a tow truck or construction crew on the shoulder. If it isn’t safe to move over, slow down below the posted speed limit.

Setaro says she has talked to about 4,000 students so far about the law. She is supremely dedicated to ensuring that no one else goes through the loss she did, keeping careful track of such accidents.

“It’s a common sense law. By the end of December, we’ll have talked to 6,000 people,” she said. “We’re resurrecting the campaign because of Marc’s fatal accident.”

She often drives around in the decorated SUV, drawing attention to her campaign.

“The reaction is very positive, they want to know my association with Marc and to explain what it means,” she said. “Many don’t know it was a law.”

The graphics on the car illustrate how the Move Over Law works, and came from the State Division of Highway Traffic Safety website.

She often teams up with State Police Staff Sergeant Brian Miller of the school and traffic safety unit to speak to schools and safety groups about the law. Miller has had close calls himself on the side of the road making traffic stops and helping motorists, including an incident on Route 138, near Garden State Parkway exit 98, where he was investigating an accident and was almost hit by a drunken driver who almost hit him on the shoulder.

“They kept going, I had to jump out of the way,” Miller recalled, adding being hit by a car is the most common way that State Troopers are either injured or killed in the line of duty. “That’s what gets us the most.” Lakewood Shopper.