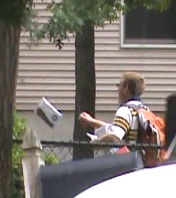 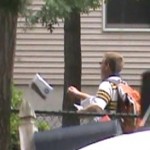 “We were told to give them out here”, they said, despite being told that most families in the area are mostly Orthodox Jewish families and that they’re wasting their time and money. At least two residents were seen returning the envelopes to the men.

LCSW tells TLS they have received multiple calls regarding these individuals.

The Missionary DVD in the white envelope from Tom Cantor, contains a photo of the Har Habayis on the front and contains the message “A message of hope and gladness for Jewish people”.

According to Jews For Judaism, Cantor is a multi-millionaire Jewish businessman who converted to and became part of the 70-million-strong evangelical Christian movement. He produced the DVD about his conversion to Christianity and hired 200 young Christians to spread the Gospel in Jewish neighborhoods.

Last month, a similar group was distributing Missionary material in the Raintree area.

According to the Rabbonim, one is to immediately discard such material. TLS-G.E.R/TLS-CCP/TLS-50.