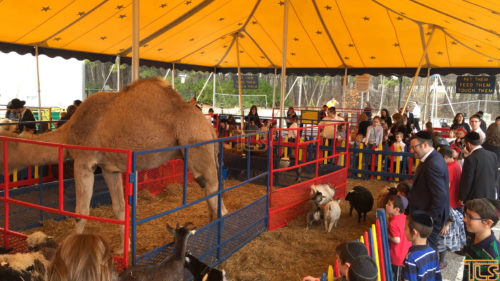 U.S. Senator Bob Menendez (D-N.J.) today reintroduced the Traveling Exotic Animal and Public Safety Protection Act. The bipartisan, bicameral legislation, led by Congressmen Raúl Grijalva (D-Ariz.-03) and David Schweikert (R-Ariz.-06) in the U.S. House of Representatives, would prohibit the use of exotic or wild animals in public performances such as circuses, carnivals and parades across the U.S.

Wild animals used in public performances are typically subjected to small cages, physical abuse, and poor nutrition and hygiene, which can often lead to disease, infection, mental distress and depression.

“Abusing animals for the sake of so-called entertainment has no place in 21st century America. It is well-past time that Congress update our federal laws and the Traveling Exotic Animal and Public Safety Protection Act is our opportunity to do just that,” said Sen. Menendez. “I’m proud that New Jersey has led the nation on this issue but it’s time we pass federal legislation that ensures a nationwide ban on inhumane and barbaric animal acts.”

“As one of the original cosponsors of Traveling Exotic Animal and Public Safety Protection Act, I’m proud to support this bipartisan, bicameral bill,” said Rep. Grijalva. “At its core, this legislation is simple. It’s about ending the inhumane practice of using exotic or wild creatures for entertainment in traveling circuses and other traveling acts. Traveling animal acts deprive exotic and wild animals of their basic dignity and create a safety hazard for the public. There’s nothing entertaining about seeing animals suffer and the vast majority of Americans agree. It’s past time we updated our antiquated animal welfare laws and prohibited traveling circuses from using exotic and wild animals for human entertainment.”

The Traveling Exotic Animal and Public Safety Protection Act is supported by Animal Defenders International (ADI) and the Humane Society of the United States.

“Wild and exotic animals are intelligent, emotional, sentient beings. We can see how animals used in traveling acts are mentally shut down because there is nothing for them to do but lie or stand in place. This is a large part of the psychological and behavioral damage which can be seen in these animals,” said ADI President, Jan Creamer. “It is past time that the U.S. took action and put an end to the suffering. Join ADI in supporting TEAPSPA, to ban the use of wild and exotic animals in circuses and other traveling acts!”

“The physiological and psychological suffering of wild animals in traveling shows is real and systemic throughout the industry. Existing laws are insufficient, partly because shows go nearly unchecked as they dash from one jurisdiction to another,” said Sara Amundson, president of Humane Society Legislative Fund. “It’s high time for Congress to set a national standard by passing the Traveling Exotic Animal and Public Safety Protection Act. We applaud Senator Menendez and Representatives Grijalva and Schweikert for their continued leadership on this issue.”

In 2019, New Jersey became the first state in the country to prohibit wild animals in traveling performances. The state bill had overwhelming bipartisan support in the state legislature. There are currently 109 partial or full bans on performing animals in jurisdictions of 34 states. The Traveling Exotic Animal and Public Safety Protection Act would not apply to the use of animals in zoos or aquariums; research facilities; and certain films, television programs, or advertising.