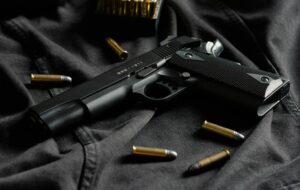 U.S. Senators Bob Menendez and Cory Booker yesterday joined a group of their colleagues in introducing the Background Check Expansion Act, which will expand federal background checks to all gun sales. Under current federal law, unlicensed or private sellers are not required to conduct a background check prior to transferring a firearm. Research indicates that as many as a quarter of all gun sales in the United States may occur without a background check.

“Too many lives have been tragically lost at the hands of gun violence and Congress must act now in order to save lives and end the senseless bloodshed,” said Sen. Menendez. “Expanding background checks can make our communities, our schools and our country safer for everyone. With commonsense reform like this, we can put an end to the gun violence epidemic that has plagued our nation for too long.”

“It’s incumbent upon Congress to act to save lives by ensuring that guns are not getting into the hands of dangerous people,” said Sen. Booker. “But for far too long, the corporate gun lobby has stood in the way of common sense gun safety measures like universal background checks that the vast majority of Americans — and the majority of gun owners– support. The Background Check Expansion Act will close glaring loopholes in federal law that allow criminals to obtain firearms and do harm.”

The Background Checks Expansion Act will require background checks for the sale or transfer of all firearms. This requirement extends to all unlicensed sellers, whether they do business online, at gun shows, or out of their home. Exceptions to the Background Check Expansion Act include transfers between law enforcement officers, temporarily loaning firearms for hunting and sporting events, providing firearms as gifts to immediate family members, transferring a firearm as part of an inheritance, or temporarily transferring a firearm for immediate self-defense.

“Time and time again, Republicans have blocked our efforts to pass meaningful, bold, commonsense gun safety reform measures but they won’t get away with that anymore,” added Sen. Menendez. “With Democrats now in the majority, we have a chance to pass legislation that will save lives and I look forward to introducing other gun safety measures this Congress. Americans want Congress to act now. Democrats are ready to deliver.”