McCarthy Elected Speaker With Help From Maryland Rep. Harris, A Former Ally Who Joined Him On Lakewood Trip 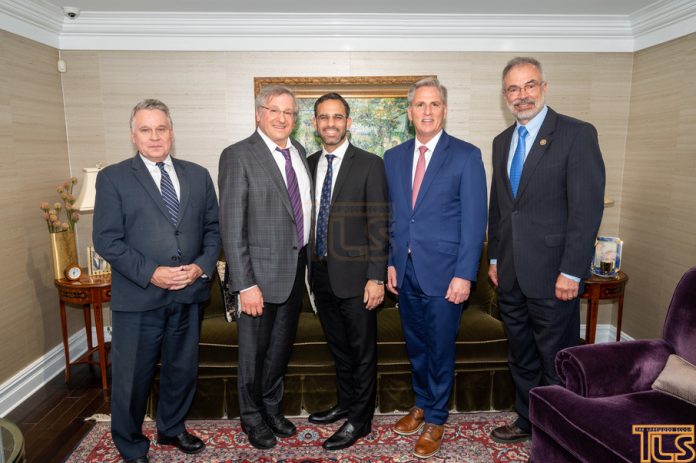 California Republican Rep. Kevin McCarthy was finally sworn in as House Speaker after a dramatic series of votes that lasted for four days and ended on the 15th ballot – the longest Speaker election since 1859.

To be elected Speaker, McCarthy successfully convinced 15 of his Republican opponents to vote for him and the remaining six to vote “present,” allowing him to win with 216 votes.

One of the members McCarthy managed to convince to vote for him was Maryland Republican Rep. Andy Harris – a former ally of McCarthy who joined the now-Speaker on his trip to Lakewood this past June.

Harris, who is the sole Republican Representative from Maryland, is affiliated with the House Freedom Caucus, a conservative group of Republicans, which includes many who oppose McCarthy on ideological grounds.

Harris, seen on McCarthy’s left in the above photo, voted 12 times for a House Speaker other than McCarthy before changing his vote to McCarthy on the 13th vote on Friday afternoon.

Speaking to reporters after the final vote, Harris said that his holdout will improve the legislative process.

“With some of the actions we’re going to take in this agreement, I think Congress is going to work better,” Harris said, citing process issues like each member having the ability for input on a bill and a requirement for legislation to have a single subject without unrelated amendments as reasons for his holdout.

He also acknowledged a decline in the power of the Speaker and the new challenges that could create.

“After the changes are put in place, the Speaker is not as powerful,” said Harris, “of course, it makes the Speaker’s job more difficult.”

New Jersey Republican Rep. Chris Smith, who joined McCarthy and Harris on their Lakewood trip and whose district includes Lakewood, Toms River Jackson and his hometown of Manchester, voted for McCarthy on all 15 ballots.