Mayor Menashe Miller On Continuing On As Mayor For 2012: At This Point, It’s Only Rumors 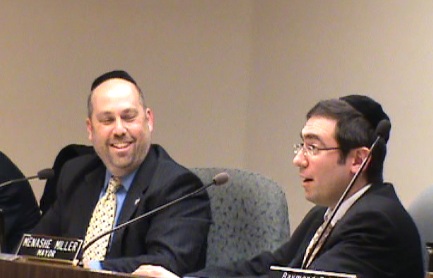 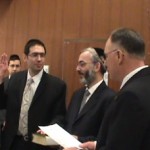 EXCLUSIVE: Despite much talk – and Deputy Mayor Steven Langert hinting – that Mayor Menashe Miller would be appointed to continue on as Mayor for 2012, the Mayor has not yet accepted the position, and says it’s just rumors at this time. “I am humbled by those saying that I should be Mayor next year”, Mayor Menashe Miller tells TLS,  “but at this point it’s only rumors”. “I haven’t given it thought yet”.

(See video below of the Mayor’s reaction when Deputy Mayor Langert asked Menashe to continue as Mayor).

The Mayor, who will be deploying to Qatar for the Holiday season was praised by the Committee for doing an outstanding job as Mayor, and proving true leadership in various situations throughout the year.

But the responsibility, says the Mayor, isn’t something he takes lightly.

“Being Mayor comes at the expense of personal and family obligations”, the Mayor says. “Such a decision doesn’t come lightly or made hastily.”

Committeeman Ray Coles, a Democrat, says he would vote for Menashe Miller to become Mayor again.

“I have enjoyed serving with Menashe since he joined the Committee”, Coles tells TLS, “Especially this past year as Mayor.” “If his name is put forth again, I will gladly vote for him”, Coles said.

The Mayor is expected to make the decision while overseas, prior to the 2012 reorganization meeting. TLS.