‘Matlosz Playground’ To Be Built At John Patrick Sports Complex 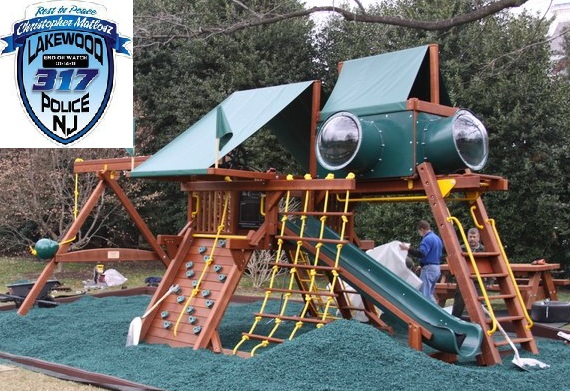 The ‘Chris Matlosz Playground’ being donated in memory of slain Police Officer Chris Matlosz, will be built at the John Patrick Sports Complex, TLS has learned. The location of the playground, donated by Marturano Recreation and Rubberecycle, two local companies, was decided on by Lakewood Police, the Department of Public Works and by the companies donating the playground, Township Committeeman Ray Coles tells TLS.

Coles says the Township was unable to add a children’s playground at the park when the park was built, due to a lack a funds, and welcomes the decision of placing the playground there.

The playground will be placed between the soccer field and the baseball field, Coles said.

The park is located on Vine Street.

“I’m thankful that children can benefit from this, especially in the Township of Lakewood”, Chris’s Fiancee, Kelly Walsifer says.

The idea of building a playground in Chris’s memory was very touching to Walsifer and Chris’s family.

“A playground donated in Chris’ name means more to me than words can say”, Chris’s Fiancee, Walsifer said when the dedication was first reported. “No amount of money, monuments or kind gestures and donations can bring Chris back, but keeping his name alive is what I want to do for as long as I live”.

The playground structure will be donated by the Marturano Recreation company, which is a local representative for the Game Time company, and Rubberecycle will be donating the flooring for the playground, using their newest Rubber Bond product. The playground will be installed by Whirl Construction of Fort Monmouth.

In 2009, Rubberecycle was chosen as the company to install the Rubber Mulch at the White House’s first playground, as reported on TLS. (See photos here).

Construction for the playground is expected to begin in the coming weeks. TLS