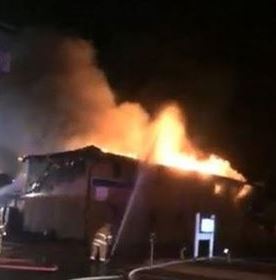 Prosecutor Coronato praised the comprehensive work of the investigative team stating, “The combined efforts of the partnering fire investigation team have produced a clear picture of what led to the motels rapid destruction and the tragic death of the four victims.”

The Fire Investigation Task Force arrived at its’ conclusions after reviewing pre and post scene photos/videos, interviewing Mariner Cove Motel management, residents, and fire scene witness’s, examining possible financial motives, and analyzing fire scene debris and mechanicals to determine the point of origin and cause. The scene examination and investigation revealed fire damage consistent with the fire originating at the motel’s second floor open air public lounge. More specifically, the origin was located along the east wall in a stuffed chair contained within the open-air lounge. The fire investigation team included work by the Ocean County Prosecutor’s High Tech Crime Unit and accelerant detection dogs to eliminate the cause of the fire as suspicious and exclude all other heat sources/accelerants beyond Mr. Alberti’s cigarette.

Along with a fire scene investigation, the Ocean County Prosecutor’s Office reviewed the Housing Code, Building Code, Fire Code and local ordinances for any potential code violations. The investigation revealed that the Mariner’s Cove Motel was in compliance with all Housing, Building, and Fire Codes and that there were no violations in the past five (5) years. Furthermore, all the rooms were equipped with smoke detectors and both occupants and initial responding emergency personnel noted smoke detectors alarming. Additionally, as part of the investigation, interviews of the Motel ownership, staff, and a majority of the occupants of the Motel were conducted. The interviews confirmed that the Motel remained in compliance with all Housing, Building, and Fire Codes as previously discussed.

However, the Motel was determined to have a video surveillance system which, though heavily damaged due to suppression activity, was salvaged by the Ocean County Prosecutor’s High Tech Crimes Unit. The video surveillance within the open-air lounge confirmed Det. Thomas Haskell’s and the Fire Investigation Task Force’s conclusion as to the origin and cause of the fire.

The Fire Investigation Task Force commended the miraculous work of the Prosecutor’s High Tech Crime Unit in salvaging and restoring motel surveillance video capturing the actions of 45 year old John Alberti and the ensuing fire configuration. After painstakingly disassembling the surveillance equipment damaged by water and fire, the HTCU provided video immortalizing the actions and behavior of Mr. Alberti and the entire fire event until the camera equipment was consumed by intense flames. The video shows Alberti smoking in the exact area in which the fire erupts. As a result of Alberti’s conduct on the motel surveillance video, the Ocean County Medical Examiner did a toxicology screen which proved positive for the presence of Opiates in Mr. Alberti’s system.

Review of all the above-information determined there was no criminal conduct in this case and that the criminal investigation by the OCPO is considered closed.

Coronato concluded, “This event tragically highlights how the impaired actions of those suffering from narcotic addiction can bring devastation to themselves and innocent unsuspecting individuals around them. By no means is heroin addiction a victimless crime”

On Friday March 21, 2014, at approximately 5:35 am, the Point Pleasant Beach Fire and Police Departments were dispatched for a structure fire at the Mariner’s Cove Motel located at 50 Broadway. The fire was suppressed and resulted in four (4) fatalities. Autopsies on the fire victims ruled the victims’ cause of death to be smoke inhalation, with a manner of death being accidental. The four victims were:

Agencies that participated actively and directly in this investigation were:

VIDEO if the fire: