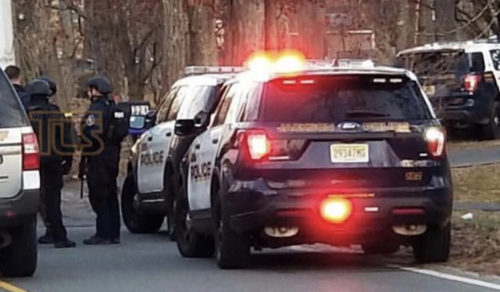 A man is in custody and charged with a slew of charges after attempting to enter a woman’s vehicle while impersonating a federal agent, and then leading police on a pursuit.

On Monday August 19, at approximately 1:07 pm, Jackson Police Officers responded to the Shoprite parking lot located on North Countyline Road on the report of a suspicious person.

A female resident had contacted 911 to report that an unknown male had followed her vehicle from Six Flags Great Adventure to the Shoprite parking lot after she had taken several random turns to verify that he was following her. Instead of going home, the female went to the parking lot to meet a family member she had contacted at which time the unknown male parked his vehicle blocking hers in a parking space and attempted to enter her vehicle by pulling on the door handles as he identified himself as a federal agent.

Officers arrived on scene and located the male suspect in a 2018 Nissan and upon attempting to identify him, he provided a driver’s license along with a Great Adventure coupon and a handicapped placard, which he claimed were his law enforcement credentials as he identified himself as a federal agent to the officers. At this time he also had the windows of his vehicle rolled up and was refusing to exit the car or cooperate with the officers further. As patrol vehicles were being moved to prevent the suspect from leaving the scene, he abruptly backed his vehicle away and fled the scene, disregarding the officer’s orders to stop.

A pursuit was initiated as the suspect vehicle recklessly drove across the parking lot, over curbs and grass onto Cook Road and then out onto North Countyline Road where he reached speeds in excess of 80 miles per hour. As the vehicles neared Jackson Mills Road, the pursuit was ordered terminated by the on duty Watch Commander. A short time later, the suspect vehicle was observed parked in the shoulder of the road near Firenze Road. Officers arrived on scene and after a struggle were able to place the 59 year old male driver under arrest. The male was then transported to an area hospital for treatment and evaluation.