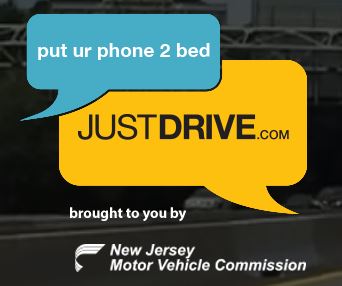 In an effort to combat the high incidence of talking and texting while driving, Lt. Governor Kim Guadagno today announced the launch ofJustDrive.com, a multi-media outreach and education campaign designed to make people think twice before engaging in this dangerous behavior.  The Lt. Governor and Raymond P. Martinez, Chairman and Chief Administrator of the New Jersey Motor Vehicle Commission (MVC), were joined by Thomas Louizou, Regional Administrator of the National Highway Traffic Safety Administration (NHTSA).

“At 55 miles per hour, looking at a text is like driving the length of a football field blindfolded,” said Lt. Governor Guadagno.  “Texting while driving is illegal and dangerous, causing tragic loss of life in just moments of careless distraction.  The JustDrive.com campaign will further spread the message of the dangers of texting while driving and, no doubt, will save lives.”

Developed and managed by the MVC, the web, television, print, radio and billboard campaign highlights the dangers and penalties for distracted driving and features an interactive website that includes a forum for citizens to share their own experiences and thoughts about this irresponsible behavior.  The JustDrive.comwebsite also serves as a repository of information on the subject from federal, state and local entities united in combating this national concern.

The National Safety Council reports that texting causes 1.6 million accidents per year, and NHTSA has found that 78% of teens and young adults say they have read an SMS message while driving.

“Given these startling statistics, continuing to talk or text while driving is just plain irresponsible behavior,” added Chief Martinez.

The kick off presentation included a display of a Ford F250 that was wrecked in a fatal 2013 crash caused by a texting driver.

“There is absolutely no doubt that the number of drivers who talk or text from behind the wheel has reached epidemic proportions in this country,” said Thomas Louizou. “I applaud New Jersey’s efforts to not only educate the public but to also try to get folks to put their phones down and keep their eyes on the road.”

The campaign is the result of a new law that went into effect in July 2014 that significantly increased the fines associated with talking or texting while driving and created the option for courts to suspend the driver’s license for up to 90 days.  More information can be found online at: www.justdrive.com.