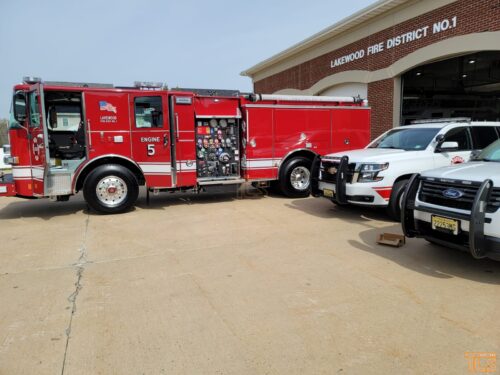 The following information is provided by the Board of Fire Commissioners of Lakewood Fire District No. 1, in conjunction with Fire Chief Jonathan Yahr, Fire Prevention Coordinator Jacob Woolf and the members of the Lakewood Fire Department.

In conjunction with Fire Prevention Week, The Lakewood Fire Department is hosting Fire Prevention Day on Sunday, October 3rd, 2021, from 11:00 a.m. to 3:00 p.m. This event will be held at Red Square which is located in downtown Lakewood at 3rd Street and Clifton Avenue. There will be interactive Fire Service demonstrations, Apparatus demonstration including the New Fire Engines, Gift Bags with Fire Safety information, and Fire Safety videos for viewing.

The history of Fire Prevention Week has its roots in the Great Chicago Fire, which began on October 8, 1871, but lasted 27 hours and incurred the most damage the following day. It remains one of the best-known fire disasters in the world. As a result, October 9, 1871, is the date most often connected with this tragic conflagration. In the end, the Great Chicago Fire killed more than 250 people, left 100,000 homeless, destroyed more than 17,400 structures and burned more than 2000 acres. While the origin of the fire has never been determined, there has been much speculation over how it began. One popular legend was that Mrs. Catherine O’Leary was milking her cow when the animal kicked over a lamp, setting the O’Leary’s barn on fire and starting the spectacular blaze. It is a less well-known fact that on the same day of the Great Chicago Fire, the Peshtigo Fire roared through Northern Wisconsin, killing 1,152 people and burning more than a million acres.

Dedicated to raising public awareness about the dangers of fire and how to prevent it, the National Fire Prevention Association, or NFPA is the official sponsor of Fire Prevention Week.

Statistics from the NFPA show that a person has a higher risk of dying today in a reported home fire than they did in decades past, and that hard truth is at the heart of the agency’s Fire Prevention Week efforts this year. This year’s theme for Fire Prevention Week, which will take place October 3rd through 9th, focuses on steadfast awareness with a simple phrase: “Learn the Sounds of Fire Safety” this phrase works to educate everyone about the different sounds the smoke and carbon monoxide alarms make. Knowing what to do when an alarm sound will keep you and your family safe. When an alarm makes noises – a beeping sound or a chirping sound – you must take action.

The NFPA encourages everyone to focus on these three simple, yet essential calls to action to reduce the risk of fire and help them prepare in the event one occurs:

• Look for places fire can start.
• Listen for the sound of the smoke alarm.
• Learn two ways out of each room.

In any fire, a quick, decisive response is essential. Take every fire alarm seriously and respond immediately. A delayed reaction could cost you your safety. Get out first and then call the fire department from outside. Stay out; don’t go back inside for any reason. Use your closest escape route. If you encounter smoke, use an alternative exit. If you must escape through a smoky area, crawl low, keeping your head one to two feet above the floor. Once out, move well away from the building to stay out of the way of firefighters and emergency apparatus.

Always identify two exits when you enter an unfamiliar building. The way you entered the building may not be the quickest or safest escape route in an emergency. Do not use elevators in a fire emergency; use the stairs. Look for standard fire protection equipment such as fire sprinklers in the ceilings, fire alarm and detection panels, pull stations, fire extinguishers, posted evacuation plans, etc. Follow your instincts – don’t stay in a building that has blocked or padlocked exit doors, is overcrowded or has hazardous activity going on that makes you uncomfortable. If you don’t feel safe, don’t stay inside. Report locked or blocked exits and overcrowding issues immediately to fire officials.

Additional Fire Safety Information for parents, children and educators can be found by visiting the Fire District Website at www.lakewoodfd.org and clicking on Sparky’s Firehouse or New Jersey Fire Safety under the Links heading.