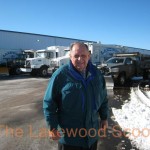 Lakewood sure took a beating during the latest snowstorm, almost completely demobilizing the town. TLS spoke with the Department of Public Works Head, John Franklin to find out just how much the massive cleanup operation cost the Department, and how much material was used during the cleanup. According to Mr. Franklin, the cleanup cost the Department approximately $120,000. That price included 400 tons of sand, 600 tons of salt and 2,500 gallons of Calcium Chloride, which is mixed into the salt/sand component. What has not been included in the above cost, was the plow vehicles damaged during the cleanup. Several of the approximately 35 plow trucks were extensively damaged as a result of the heavy snow. Some of the damages included dents, broken plows and burnt transmissions.