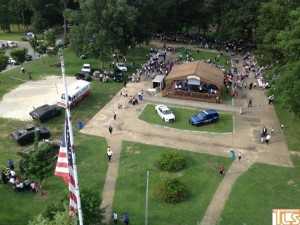 The Lakewood Police Department is inviting the entire Lakewood Community to its annual Night Out Against Crime, Tuesday, August 12, 2014, from 4:00 to 8:00 p.m. in Lakewood Pine Park, Country Club Drive and County Line Road.

The Night Out Against Crime, a national program, is an opportunity for the community to meet local police officers, community volunteers, and many organizations in an effort to increase awareness about all anti-crime efforts.

Free Pizza and barbecue, under Rabbinical supervision, and ices will be available.

About Night Out Against Crime (Taken from natw.org)

The introduction of National Night Out, “America’s Night Out Against Crime” by NATW’s (the National Association of Town Watch) Executive Director Matt Peskin in 1984 began an effort to promote involvement in crime prevention activities, police-community partnerships, neighborhood camaraderie and send a message to criminals, letting them know that neighborhoods are organized and fighting back.