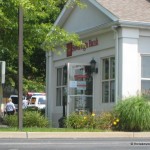 (Photo of scene) A 44-year-old Lakewood woman is facing eight years in prison after admitting Monday that she robbed a Jackson bank last year, (as first reported here on TLS). Kyla D. Tobe of Delaware Trail, Lakewood, pleaded guilty to second-degree or unarmed robbery Monday before Superior Court Judge Stephanie M. Wauters. When questioned by Deputy Assistant Public Defender Eugenia Lynch, Tobe said she went to the Sovereign Bank on West County Line Road in Jackson on Aug. 18, passed a note to a teller and left the bank with $6,000.

An indictment charging Tobe with the robbery alleged that the note she passed to the teller said, “This is a robbery. Hand me the money and nobody gets hurt.”

Assistant Ocean County Prosecutor Eshan Chowdry said Tobe, after leaving the bank with the cash, went to a pawn shop, where she bought back between $800 and $900 worth of jewelry she had pawned there.

Tobe was identified as the suspect in the robbery because of a fingerprint she left behind at the bank, Chowdry said. She has a criminal record for assault, theft and narcotics offenses, court records show.

Tobe was arrested two days after the bank robbery as a result of an investigation by the Ocean County Prosecutor’s Office, Ocean County Sheriff’s Office, Jackson police and the FBI. A search of her home uncovered $2,700 of the stolen cash, Chowdry said.

Under a plea agreement, Chowdry said he will recommend that Tobe be sentenced to eight years in prison with a requirement that she serve 85 percent of the term under the state’s No Early Release Act. He said Lynch plans to argue instead for a seven-year prison term for her client.

Tobe also will be required to make restitution for the portion of the stolen money that was not recovered, Chowdry said.

The sentencing is scheduled for March 29. APP/TLS