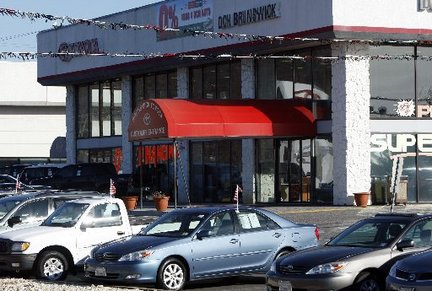 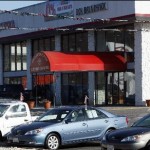 At Toyota World of Lakewood, sales manager Joe Glidden said they had received many calls from customers with questions about the recalls. But he said customer traffic had only slightly decreased since the gas pedal recall was announced Jan. 21. Customer Herb Jackson, shopping at the Lakewood showroom for a new Prius gas-electric hybrid — which is not one of the vehicles that was recalled — said he’s still confident in the world’s biggest automaker. “I don’t plan on changing horses,” said Jackson, who has owned many Toyotas over the years. Other customers are checking out Toyota’s competition, however. In Pittsburgh’s northern suburbs, Richard Bazzy, owner of two Ford dealerships, saw increased traffic on Saturday and noticed more Camrys and Corollas driving onto his lots. But he also said it has yet to turn into increased sales from Toyota customers.

Bazzy said the Toyota troubles should get customers to at least consider Detroit’s improved cars.

Industry analysts expect Ford to be among the beneficiaries of Toyota’s troubles because some of its models have recently received good quality scores from third parties such as Consumer Reports magazine.

Rob Larson, a sales manager at Larson Ford in Lakewood, said he hadn’t seen an influx of disaffected Toyota customers so far. But he expects to see them soon as more people learn about incentives being offered by Ford, such as $1,000 to Toyota, Lexus, Scion, Honda or Acura drivers who trade in vehicles or have leases expiring by June 30. GM and Chrysler are offering similar deals to lure Toyota customers.

At Hyundai Giant in New Port Richey, Fla., CEO Scott Fink said dealers are having trouble figuring trade-in values on Toyotas, wondering if they will drop even after they are repaired.

He said it’s too early to tell if there will be a mass exodus from Toyota.

The recall widened beyond Toyota over the weekend. France’s largest automaker, PSA Peugeot Citroen, said it was recalling 100,000 cars across Europe to change accelerator pedals on two models designed and produced in a joint venture with Toyota. The recall is a “preventive” measure, Peugeot said, adding that there has been no evidence of accidents or safety problems linked to the pedals.

The National Highway Traffic Safety Administration said on its Web site that it opened an investigation last Tuesday into CTS Corp., the manufacturer that supplied the faulty gas pedals to Toyota. The agency wants to find out whether CTS notified other gas pedal customers of the recall and if other automakers have received reports of similar problems with the pedals.

The pedal recall is separate from another recall involving floor mats that can bend and push down accelerators. The two recalls combined affect more than 7 million vehicles worldwide. While the multiple recalls, investigations and image troubles are disheartening for Toyota owners, for now many still remain loyal.

“They’re going to be fine,” Stacey Krupski of State College, Pa., said as she parked her Toyota Saturday. “And I would most likely guarantee the fact that my next car will still be a Toyota.” AP/Star Ledger