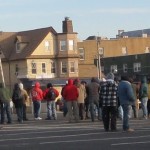 Like much of the nation, New Jersey has seen its Hispanic population grow at an amazing rate over the last 10 years. This is nothing new in a state with long-established Puerto Rican and Dominican communities. What’s perhaps most surprising about new U.S. Census demographic figures to be released today, though, is the dramatic jump in the state’s Mexican population — which saw its numbers rise by 115,000 people since 2000.

Lakewood has a population of 93,843 with a Hispanic community of 16,042 and Mexican community of 9,661. A change of 242% since the last census, the fastest growing percentage in the State, according to a report. See chart in Star Ledger.