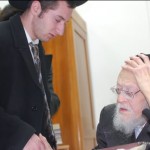 (PHOTOS) When they signed up for the Hartman Family Foundation Wish at the Wall, Chai Lifeline’s annual 10-day trip to Eretz Yisroel for teens who have finished cancer treatments, fifteen young adults and the parent who accompanied them were ready for the spiritual journey of a lifetime. They would spend ten glorious days davening at the Kosel and visiting the sites. What they hadn’t counted on was the surfeit of brochas they would receive from gedolim and rebbeim across the country. It was hashgacha pratis that the group, which includes 15 teenage cancer survivors and a parent who had stayed by their side during the ordeal of treatment and recovery, would find itself at the Kinar Hotel in Tiveria at the same time as a conference of dayanim. The group was privileged to meet with Harav Shlomo Amar, the Sephardic chief rabbi. The Rishon Letziyon was extremely gracious, giving a d’var Torah and bestowing upon them his brocha for health.

“Rav Amar reminded us that all health and healing comes from Hashem. His message resonated with families who have experienced sickness and refuah firsthand,” said Rabbi Shlomo Crandall, director of Chai Lifeline Midwest, and the group’s leader.

The group arrived last Thursday, and the kosel was their first stop. Many Camp Simcha counselors learning in Eretz Yisroel came to welcome them. Together they sang songs of hoda’ah, thanking Hashem for giving them the health and opportunity to come to the holy site together. They returned the next night for Kabbolos Shabbos, crowding into the small antechamber to escape the rain. As in previous years, many other daveners joined the minyan, their voices and tefilos rising to the heavens.

After a magnificent Shabbos, the group had the opportunity to meet with Horav Nosson Tzvi Finkel. The beloved Rosh Yeshiva gave each child his personal brocha after addressing the entire group. Horav Raphael Shmuelevitch, who was visiting Horav Finkel, also gave the young people his brocha.

The group left the Rosh Yeshiva’s home with their hearts uplifted. But there was more to the evening. They drove to Mea Shearim and met with Horav Yosef Sholom Elyashiv. As they waited in the anteroom, they turned and found themselves face to face with Dayan Aharon Dovid Dunner and the Grand Rabbi of France, Rabbi Giles Bernheim. Both spoke to the group before they were let in to see Horav Elyashiv. They eagerly crowded around the gedol, who gave each a personal brocha before sending them to their third stop: the melava malka tish of the Tolener Rebbe.

“The Rebbe ushered us into a side room and got up from the tish to greet us,” reported one of the parents. “The Chassidim were astounded that the Rebbe left the tish for us. He greeted us in English and shared with us the power of Tehillim. He then handed each one of the teens a bottle of wine, which he said we should save for our simchos IY”H.”

The group is spending ten days touring the country from north to south. They’ve explored the tunnels adjacent to the Kosel, Ir David, Kever Rachel, the Golan Heights, Gamla, and an archeological dig in Beit Guvrin. They’ve also hiked in Ein Bokek and swum in the Dead Sea, visited an army base and several sites related to the modern state.

This is the first trip to Eretz Yisroel for many of the participants. “We realize that many good things come from an unfortunate situation. We’re so grateful to have the opportunity to come here. Chai Lifeline gave my son so much support during his chemotherapy, which was really difficult. Seeing him go up to the Kotel, I know he was giving thanks,” said Brian Altman.

“We were waiting for a long time to celebrate the fact that my daughter, and all the kids, are healthy. We have the privilege of coming here to pray and say thank you,” added Gisela Weissman. “We way thank you to Hashem, and to Chai Lifeline, for helping us through this difficult part of our lives.”

The Hartman Family Foundation Wish at the Wall Trip is a project of Chai Lifeline Midwest.