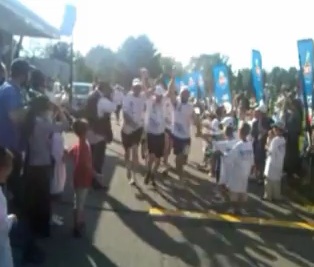 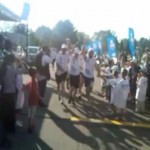 [Video of last year’s finish line] A crowd of thousands is expected to converge this week at Sullivan County Community College in upstate New York to cheer on runners in a 200K relay race from Brooklyn’s Prospect Park to Loch Sheldrake to raise money for children with cancer. The race, organized by JRunners, a Brooklyn based organization dedicated to increasing health awareness in the Jewish community while benefitting the health of others, will benefit the Ohr Meir Foundation, a not for profit 501C3 organization that coordinates and sponsors medically supervised trips and events including a four day fantasy trip to the Orlando theme parks for children with cancer.

“Ohr Meir has absolutely no overhead and every dollar raised goes directly to kids with cancer,” said JRunners president and co-founder Steven Friedman. “Cancer has robbed these children of their childhood and Ohr Meir helps not only helps them get it back but helps them in their battle against cancer. JRunners is proud to partner up with Ohr Meir for this year’s race.”

Last year’s race was an overwhelming success, with sixty participants ranging in age between 12 and 52, hailing from Brooklyn, the Five Towns, Passaic, Monsey, upstate New York, Lakewood, Pennsylvania and as far away as Los Angeles, joining forces in ten man teams to raise money for a 39 year old Flatbush father of five stricken with Amyotrophic Lateral Sclerosis, a fatal degenerative condition also known as Lou Gehrig’s disease. Last year’s event was described by one runner, a veteran of numerous marathons, as “a race unlike any other”.

This year’s race will go down in the record books as the first relay race worldwide to utilize state of the art chip timing to track the progress of each runner using timing systems positioned along the course. A special tag with an embedded computer chip will be attached to the ankle of each runner with a Velcro strap for the duration of the race enabling timing clocks at every exchange point to track each runner’s time. This information will be transmitted electronically, via text message and social media network feed, allowing family, friends and spectators to follow the runner’s progress in real time.

“In today’s fast paced world of information, it made sense to take our race into real time so that even more people could share the excitement of this unique event,” said Friedman. “No relay race has ever used chip timing given its complicated nature in an event such as this. JRunners worked out the logistics and are thrilled to be the first relay race ever to offer this exciting technology.”

This year’s race includes runners from far and near. S. Perel, a 35 year old runner from the Spruce street area of Lakewood, NJ is excited to participate in the race after hearing so much about it from last year’s participants. “I’ve run in other races and with other clubs but JRunners suits me best. It’s great to find likeminded frum runners who want to stay healthy, and also want to raise awareness of the benefits of a healthy lifestyle. Also, and just as important, is the tzedaka aspect of every race. I hope that we’ll have a Lakewood chapter of JRunners sometime soon.”

Veteran USA Track and Field race planner Steven Holmbraker, designer of last year’s JRunners course, has created a newly expanded route that includes an additional fifteen miles, not only affording better timing for davening shachris but taking the race through additional Jewish communities along the way. Strategically placed exchange points along the way allow runners to take over for each other as each runner completes three approximately 5 mile long legs over the course of the race, with live music, food, gourmet meals, a live broadcast of Nachum Segal’s JM in the AM and more at major exchange points along the way. A gala barbeque for the runners and their families in addition to an expanded carnival, concert and other surprises at the finish line will make this event truly unforgettable. 8th day is headlining the concert which will include a whole host of other singers including Eli Schwebel of Lev Tahor singing songs from his upcoming solo album. The Carnival is expected to be the biggest in the Catskills with rides, and 40 foot high inflatable’s for all ages. If last year’s carnival is any indication of how this year’s will be- it will be a great event. Uncle Moishy will also be performing for the children just prior to the start of the concert. The Carnival will run all day on Thursday August 18th starting at 2:30 PM (and even earlier for day camps that make special arrangements), Uncle Moishy at 3:30PM, Concert at 4:30PM, and runners are expected to start arriving to the finish line shortly before 5PM. The public is also encouraged to come and cheer on the runners on Wednesday evening from 9:45PM – 11:45PM at the Glatt Mart Cheering Zone right outside Glatt Mart on Avenue M. The runners will be running through an official exchange there and there will be music, food and festivities for all to enjoy.

Aside from affording runners the opportunity to run a 200K relay, an event normally held over the weekend and by definition not accessible to the orthodox Jewish runners, the JRunners race is a unique experience, pairing the thrill of competitive racing with the camaraderie of teamwork, while also encouraging and promoting the benefits of a healthy and vigorous lifestyle. JRunners provides participants with top of the line sports gear, caps, t-shirts, duffle bags, gourmet meals, trainers and support staff and a not-to-be believed night out on the town for the winning team.

The race itself is truly the event of a lifetime as runners not only race for personal fitness, but also to raise money for a worthy cause, while at the same time enjoying a bond that can only be forged by an experience of this type. The support and closeness fostered as the runners support each other is indescribable and the excitement and warmth are contagious, from the moment the race kicks off at Prospect Park until the race ends in the Catskills amid, literally, thousands of cheering fans.

Mordechai Ovitz, winner of the recent JRunners 5K run in Prospect Park and a veteran of last year’s Catskill relay race had difficulty describing the experience that is the JRunners 200K.

“How can you sum up twenty four hours of madness in just a few words? What I remember most was the sheer energy – twenty four hours of non-stop motion, supporting your friends combined with the intensity of running your own legs. Running in the dark I saw the bouncing light of someone running in front of me and I knew I had to do whatever it took to pass that runner. We ran through the pitch dark, the pouring rain and scorching heat, all in a matter of hours. Overcoming all those challenges was simply incredible and I didn’t stop talking about last year’s race for two weeks straight.”

For more information on the 200K relay race or to sign up for the race, go to JRunners.org, email [email protected] or call 646-368-7989. To sponsor a runner on his courageous journey please go to http://www.jrunnersrelay.org/mt-choose.php. TLS-RY.