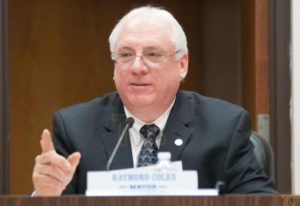 Hi Mr Mayor, two questions: James Street was recently repaved over the tracks (between Williams and Sunset). However, while the road itself is now smooth, there is now a steep bump when going over the tracks. is that bump supposed to be there?

Also, the intersection of Rt 9 by Cushman Street and the new shopping plaza across the street were recently repaved and left turn lanes were added in all 4 directions. Isn’t there also supposed to be a traffic light added, as the intersections is very busy?

The paving by the tracks is not complete. The county is waiting on a final permit from the DEP. Once that is received the bump will go away. The rest of the road was able to be done during the time we normally do paving to take advantage of the lower traffic when folks are away.

There is a traffic light slated to go in at Broadway & Rt 9, not Cushman.

Thanks for reaching out.

As residents of the Squankum Rd area, I would first like to thank you and all those who were involved with paving the road (between 10th street and county line rd).

The lines were painted halfway through the middle of the road, however it seems like it was forgotten that cars are allowed to park on one side of the street. Now the ones who drive on the side of the parked cars need to drive on top of the painted lines.
Additionally, drivers coming the other way don’t always realize this, driving near the lines and come very close to oncoming traffic.

So I am wondering – will the lines be repainted?

Thanks for your time.

The engineering department is finalizing the striping plan with Traffic & Safety. The striping should be completed in the next couple of weeks.

Thanks for letting me know about this.

Have a question for the Chief? Send it to [email protected]