Lakewood man who heard the double fatal accident and was first on scene describes the horrific tragedy; Calls for action 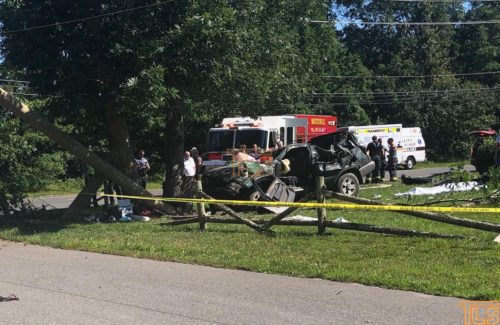 The man who heard the fatal accident at the Lakewood/Jackson border yesterday and was first on scene, described exclusively to TLS the horrific tragedy.

The Lakewood man was working just a few doors down when he heard the engine and then the massive boom.

“I heard them gun the engine – the vehicle must have been going over 100 MPH,” the man told TLS.

“I was there in less than a minute. I was the one who called 911 and who the dispatcher instructed to check them for a pulse,” he said.

When he came looking, he initially couldn’t even find the vehicle – until he saw a cloud of smoke and dust.

When he approached the vehicle, he says he didn’t realize there was a patient on the ground – he was ejected from the vehicle.

In a frightening twist, the man says three bikers were lucky to be alive.

“Ten minutes before this happened, I arrived back there from going to pick something up. As I drove up Faraday Avenue, there were three Bike 4 Chai riders going down Faraday Avenue.” They were lucky to have not been there just 10 minutes later.

Something needs to be done

The man says he wants authorities and the Township to look into this stretch of road.

“I have been living in Lakewood for 30 years. It has always been known that if you want a place to drag race, Faraday Ave is the place,” he said.

“In my opinion, it is the Township of Jackson to at the very least install multiple stop signs on this street to prevent something like this from happening again. This should not take days, weeks, months, or years to be done. IT HAS TO BE DONE TODAY.”

He added, “To the township of Jackson: Don’t let the lost lives of these two people be in vain. Do something to prevent this kind of tragedy from happening again. One of your loved ones could have been a victim just the same.”

Despite being and EMT for approximately 40 years, the man says this was the worst he saw.

“I have seen gunshot wounds and all, but this was something I never saw before,” he said. “I am still in shock as to what I heard and saw. I did not sleep for even a minute last night and am still shaking. I can not stop thinking about this. My condolences to the families of these two people, and may they both rest in peace.”