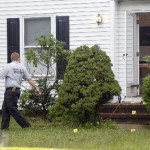 (See extended article for related videos) A suspected drugs and gun trafficker accused of ambushing a team of police officers when they stormed his Lakewood home was indicted today on 34 charges related to the shootout. A grand jury in Ocean County returned the indictment against Jaime Gonzalez, 39, nearly five months after four Lakewood police officers were hit by gunfire as they tried to arrest him. Gonzalez, who was also shot in the exchange of bullets on Sept. 24, was charged with 11 counts each of attempted murder and aggravated assault for each of the officers involved in the raid. The indictment also charged him with six drug offenses, four weapons charges and one count of fortifying his home for illegal drug activity and another aggravated assault charge relating to all the officers.
After the officers broke down the door to the MacKenzie Court home and headed upstairs, Gonzalez was at the top of the stairs waiting for them, authorities said at the time.

Patrolman Jonathan Wilson, 33, was shot in the face and Lt. Greg Meyer was shot in the foot. Both men are recovering from their injuries. Officer Leonard Nieves Sr. and Sgt. Louis Sasso escaped serious injury because they were wearing bullet-proof vests.

Authorities are trying to determine whether Gonzalez was tipped off after police arrested another target of the investigation in Seaside Heights hours earlier.

At the time of the shooting, Ocean County Prosecutor Marlene Lynch Ford declined to provide details about the origin of the investigation other than to say it involved guns and drugs. The joint task force on the raid included Lakewood police, State Police and members of the prosecutor’s office and the federal Bureau of Alcohol, Tobacco, Firearms and Explosives.

One of the weapons charges was receiving a stolen handgun. Ford had said the .357 Magnum used to shoot the officers had been reported stolen from South Carolina. Star Ledger.

Click here to view first media report of the story from TLS.