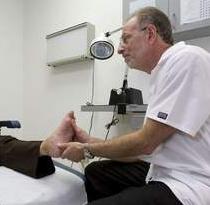 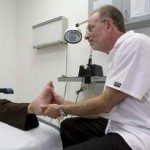 Kathryn Cace was in such agony from foot ulcers that she couldn’t sleep at night. An application of foot gel and an antibiotic was providing no relief, and walking was extremely painful. Desperate for help, Cace sought out the services of Dr. Leslie Aufseeser, a local podiatrist she had heard good reports about. In an August visit, Aufseeser thoroughly cleaned out the wound on the heel of Cace’s left foot and then applied Regenicel, an ointment he invented 20 years ago. The results were very positive.

“I can’t say enough good things about what the doctor has done for me,” said Cace, 65, of Brick. “I was at the end of my rope. I apply the ointment every day, and the wounds have really gotten better. I feel like I have gotten my life back.”

When asked about the ingredients in his “special” ointment, Aufseeser did his best Col. Sanders impersonation, swearing never to give out the recipe. But after some gentle prodding, Aufseeser smiled and said it was a combination of A & D ointment, vitamins and antibiotics.

Regenicel dates back to 1988, when Aufseeser first put three ingredients on a woman’s toe ulcer. He noticed dramatic improvement and decided to combine the ingredients into one ointment, tinkering with the amount of vitamins and antibiotics.

Ten years ago, Aufseeser tried to get his discovery approved by the Food and Drug Administration. He said he submitted numerous clinical studies, where the ointment proved effective over 90 percent of the time.

But the FDA kept rejecting them.

“I asked to go through the protocol for clinical testing they use, but they wouldn’t allow me to do it,” Aufseeser said. “It is very frustrating because I have had great results with my patients. There are so many ointments out on the market now that don’t do a thing. Mine works. My feeling is the FDA doesn’t want little guys like me to come aboard because they work with the big pharmaceutical companies.”

Aufseeser tried to sell Regenicel to some local podiatrists, but the FDA would not permit it.

But he is able to use it in his Lakewood office, where many diabetics, suffering from foot, toe and leg ulcers, have found relief.

“I would recommend this ointment to anyone,” said Cace, a diabetic for 54 years. “It has provided so much relief for me. I know this can help other people.”

Though Aufseeser is upset by the FDA rejections, he has found much satisfaction in helping people with foot ulcers.

“It brings me a lot of joy to see their conditions improve,” Aufseeser said. “It is a great feeling when your patients get better. Sure, I would love to see my ointment on the mass market. But if it doesn’t get there, I’m happy to help people around here get some relief.” APP