Kiddush Hashem On The Slopes Of Vermont 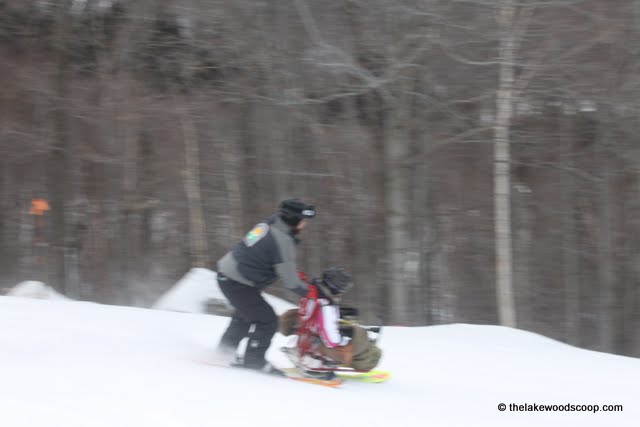 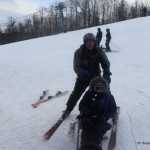 (PHOTOS & VIDEO) This past weekend, Kids of Courage, an all volunteer organization providing medically supervised travel and adventure for the sickest children in the community, took on an amazing task. The group traveled to Sugarbush Vermont for what became the largest single day adaptive ski event in North American history. Thirty three children many with very serious illness and disabilities joined 70 Kids of Courage volunteers and 70 Vermont Adaptive Ski volunteers for this monumental undertaking. The children included those on supplemental oxygen as well as three

on ventilatory support , two with tracheotomies. Each camper was prepped by their Kids of Courage counselor and then hit the slopes with two to three adaptive ski instructors. Temperatures on the mountain we 15 degrees Fahrenheit and ten degrees below with the wind chill factor. These extreme conditions made the medical supervision difficult but baurch hashem all children returned safely as overseen by co-Founders Dr. Stuart Ditchek and paramedic Howie Kafka as well as Sara Miriam Kaplan, RN and other medical personnel.

Co-Founder Ari Adlerstein and program director Ari Dobkin along with the girls head counselors Jeanne Franco and Elisheva Heyman handled the meticulous preparations including generous donations of ski apparel for the campers by Spyder Corporation.

The weekend started with a beautiful Shabbos program at the Sheraton Hotel and Conference Center in Burlington. Following shabbos, the children were treated to a world class concert and melevah malkah.

For Vermont Adaptive this was the largest aggregation of individuals with disabilities on any single day. Specialized adaptive ski equipment was brought in from all over the state as no single mountain has the volume of equipment needed for a group this size. The day was filled with first ever experiences including the first time three oxygen dependent skiers were on the same mountain, with ventilators and supplemental oxygen. Word was sent out all over the adaptive ski community that Kids of Courage was there and brought the largest ever group on a single day program.

There was only one camper who was unable to ski due to his extremely brittle bones as he suffers from metastatic cancer. In a compassionate effort for inclusion, the general manager of Sugarbush Mountain personally drove took the young boy to the summit with his counselor on a specialized “snow cat” vehicle with a heated cabin. Needless to say -the trip to the summit under strict medical supervision was the highlight of his day.

Levi Dessler, a Kids of Courage volunteer who played an integral part in arranging the weekend said “This was the most unbelievable day of my life. I have never seen kids this ill have so much fun. Every child left feeling empowered to do more things which they thought they could never do”.

Kids of Courage is an all volunteer group and travel year round with these highly specialized medically needy children. Their volunteers are trained in the care of the campers and provide critical support to the medical team. All funds raised by Kids of Courage are used towards the cost of the trips and events. There are no salaries or bonus compensations to any member of the team. For more information please visit www.kidsoc.org.