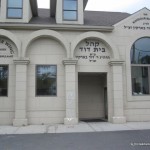 After many months of being in the Hospital with a life threatening illness, R’ Moshe Shimon Ahron Ben Gitel was welcomed back this Shabbos at Khal Bais Dovid, by hisfellow Mispallelim. R’ Moshe Shimon on Wednesday returned home from the Hospital and was excited to finally come back to Shul.

On Shabbos morning, R’ Moshe Shimon was given the Aliya of Chazak, which followed by the Mispallelim resounding a very loud and tremendously emotional  “Chazak Chazak V’nischazek”.

After the aliya, the over 200 mispallelim burst out in song and sang “Chasdei Hashem Ki Lo Samnu”.

“The K’hila was very Mechuzak from his return”, a Mispallel of the Shul tells TLS. “After so much Davening, Learning, and extra Kabollos the Yeshua was here and he was able to come home”. TLS.