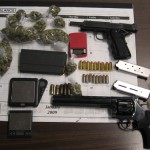 A jury today found a 41-year-old Lakewood man guilty of 13 drug and weapons offenses and also found his 42-year-old sister guilty of seven of the offenses while acquitting her of the others. The jury announced its verdict in the case of Patrick and Robin Muldrow shortly before 4:30 p.m. Robin Muldrow threw a computer monitor off the defense table when the jury forewoman announced her guilt on the first charge — possession of five ounces or more of cocaine. The forewoman went on to say the jury had found Robin Muldrow guilty of possessing cocaine with the intent to distribute it, possessing more than 50 grams of marijuana, possessing the marijuana with the intent to distribute it, and possession of a knife, revolver and a BB rifle while engaged in drug activity.

The jury acquitted Robin Muldrow of possessing a Cobra handgun, two rifles and three shotguns while engaged in drug activity.

Patrick Muldrow, facing the same charges as his sister, was found guilty on all counts. He was not in court for the verdict.

Patrick Muldrow had voluntarily absented himself from the trial before Superior Court Judge James Den Uyl following arguments with the judge about his attire.

Den Uyl had tried to persuade the defendant to wear street clothes for the trial, but the defendant insisted he would wear his jail uniform unless he was given an Armani suit and alligator shoes to wear.

After the verdict, the jury again convened to consider additional charges against both defendants of possession of weapons by convicted felons.

The cache of drugs and weapons were uncovered in a raid on Jan. 22, 2008, at a property at 420 Clearstream Road in Jackson where the Muldrows were said to stay.

More than a half-kilogram of cocaine and a pound of marijuana were seized along with weapons, authorities have said. Assistant Ocean County Prosecutor Michael Weatherstone told the jury the drugs were worth $80,000. APP