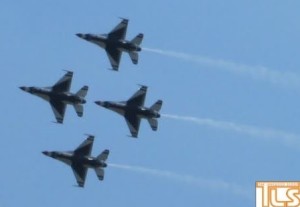 Joint Base McGuire-Dix-Lakehurst will open its doors to the community for a special open house and air show May 10 and 11.

The event will be showcase “America’s Strength” and how support from the local communities is essential for defending our nation’s air, land and sea.

Community members will have an opportunity to get a closer look at the joint base’s operational capabilities and total-force integration. Every branch of
service on the joint base will be present to engage with the community.

The world-renowned Air Force Thunderbirds flying team will rip through joint base airspace in their trademark F-16s, performing the most daring maneuvers known to man. The Golden Knights, the U.S. Army’s premier parachute team, will awe the audience with death defying stunts and acrobatics and many others.

Various talented civilian pilots will make the voyage to the joint base also to strut their stuff in both vintage and modern aircraft.

More than 25 historic and current static aircraft will be displayed during this year’s event–Bell UH-1 Iroquois, C-5 Galaxy and T-1A Jayhawk. Many of
history’s most storied aircraft as well as today’s cutting-edge platforms will be on display for visitor’s viewing pleasure.

The Department of Defense hosts open houses to enhance public awareness of the military’s mission, equipment, facilities and personnel and to promote
positive community relations.

The first air show on JB MDL took place in December 1945. The most advanced aircraft of that age such as the P-38 Lightning, the P-51 Mustang and the
P-59 Air Comet, the U.S’s first jet fighter, were put on display for the general populace to admire.

Editor’s note: Depending on the weather, the dress code and atmosphere at the event may not be appropriate for Frum families.