Join the New Cycle of MISHNAH YOMI Beginning THIS SHABBOS! 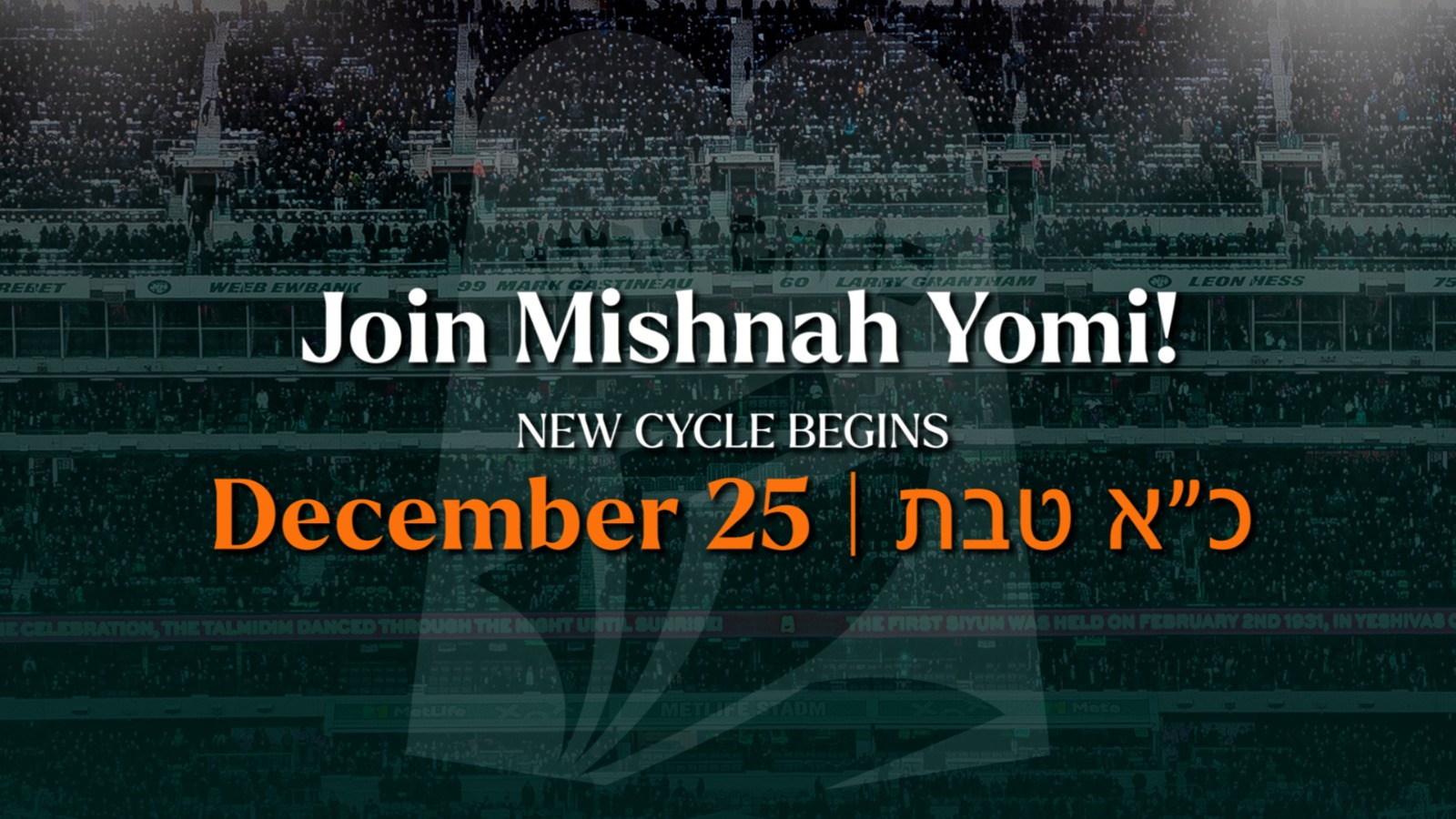 Learn just Two Mishnayos a Day and complete Shas in time for the next Siyum HaShas!

In 1923, towards the end of the first Knessiah Gedolah of Agudas Yisroel in Vienna, Rav Meir Shapiro’s groundbreaking concept of Daf Yomi, the world-wide initiative to study the same daf of Gemara each day and finish the complete cycle of Talmud Bavli in just over seven years, changed the world.

An extension of this revolutionary concept made popular around the world by Agudas Yisroel came about in 1933 when, at a meeting of gedolim in Lublin, it was proposed that Mishnah should be studied daily as well. Many gedolim of the time accepted the proposal, which was directly connected to the Daf Yomi. A Mishnah Yomi calendar with the exact dates of the learning cycle was printed and set in motion.

In 1938, at the second Siyum HaShas, Rav Aryeh Tzvi Frommer, Rosh Yeshivah of Yeshivas Chachmei Lublin discussed the importance of learning mishnayos for everyone. The format for Mishnah Yomi that we follow today came about In 1947, when Rav Yonah Sztencl, a talmid of Rav Frommer, recommended a plan for everyone to be able to complete all of Shisha Sidrei Mishnah. This proposal, to learn two mishnayos each day, a direct offshoot of Agudas Yisroel’s Daf Yomi plan, then became widely accepted and was endorsed by Rav Isser Zalman Meltzer, the Tchebiner Rov, the Gerrer Rebbe, and many others.

Today, Ki Heim Chayeinu, a division of Agudas Yisroel dedicated to promoting Torah learning initiatives world-wide, carries on the legacy of Rav Meir Shapiro’s Daf Yomi by leading the charge to bring the vital program of Mishnah Yomi to everyone. Mishnah Yomi is an accessible, valuable and eminently attainable goal for young and old alike. The Mishnah Yomi program is perfect for Father-Son learning, and allows for a siyum to be made every year!

By finishing Shisha Sidrei Mishnah, we learn the entire Shas, the entire Torah sheb’al peh. Daf Yomi learns the entire Talmud Bavli, and Maseches Shekalim which is part of Talmud Yerushalmi. However, Daf Yomi doesn’t learn Seder Zera’im and Taharos, except for Maseches Brachos and Niddah. Rav Shalom Kamenetsky points out: “To finish Shas in its entirety by learning the mishnayos as well, is an incredible accomplishment, and the siyata d’Shmaya is unparalleled.”

Some make the mistake of minimizing the importance of mishnayos, however, says  Rav Moshe Heinemann, “saying that mishnayos is just for kids and we adults don’t need to learn mishnayos is like saying Chumash is for children but we just learn Gemara- it’s completely wrong. The whole Gemara and all of that Torah is based on the mishanyos! Even Rav Moshe Feinstein zt”l used to learn two mishnayos a day while he rolled his tefillin.

Because mishnayos are so accessible, they require a minimal commitment of time, but the reward is tenfold. By joining now, allotting less than 10 minutes to learn just two mishnayos a day, anyone can complete mishnayos in its entirety in time for the next Daf Yomi Siyum.

As we approach the new Mishnah Yomi cycle, excitement is building. Many Daf Yomi maggidei shiur have already committed to making Mishnah Yomi part of their daily shiur, and dozens of schools have arranged to have their students join the learning of Mishnah Yomi for the new cycle.

“Anyone can do it!” Reminds Rav Yosef Elefant. Mishnah Yomi is the perfect daily learning program for people of all ages and backgrounds. It can be an opportunity to bond with a child or grandchild as you enjoy the feeling of accomplishment – completing a seder of Mishnah every year. “Even if you’ve made a siyum on all of Shas,” says Rav Noach Isaac Oelbaum, “you can gain a level of retention and yedidyah all over with a handle on mishnayos. We see so many who take on learning mishnayos for relatives who have passed on, why wait? Let’s elevate neshamos while we are still alive, and connect to kedushah on an even higher level!”

Ki Heim Chayeinu is sponsoring thousands of copies of pocket-size Maseches Brachos of the Schottenstein Elucidated Mishnah and Ryzman Hebrew Mishnah for those who commit to learn Mishnah Yomi.

For a free Mishnayos and Calendar visit artscroll.com/mishnahyomi or call 718-921-900×1

Join Klal Yisroel and Agudas Yisroel in learning Mishnah Yomi today…and complete all of Mishnah in under six years!