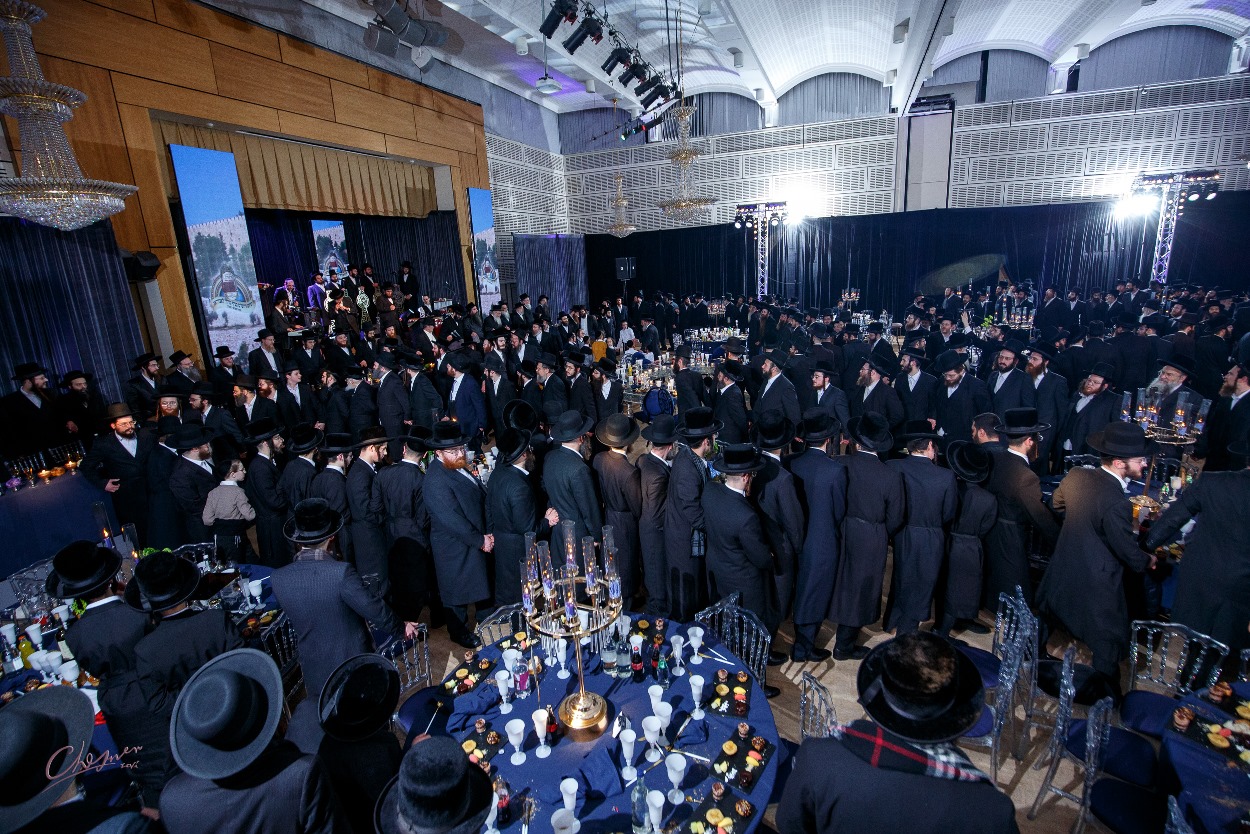 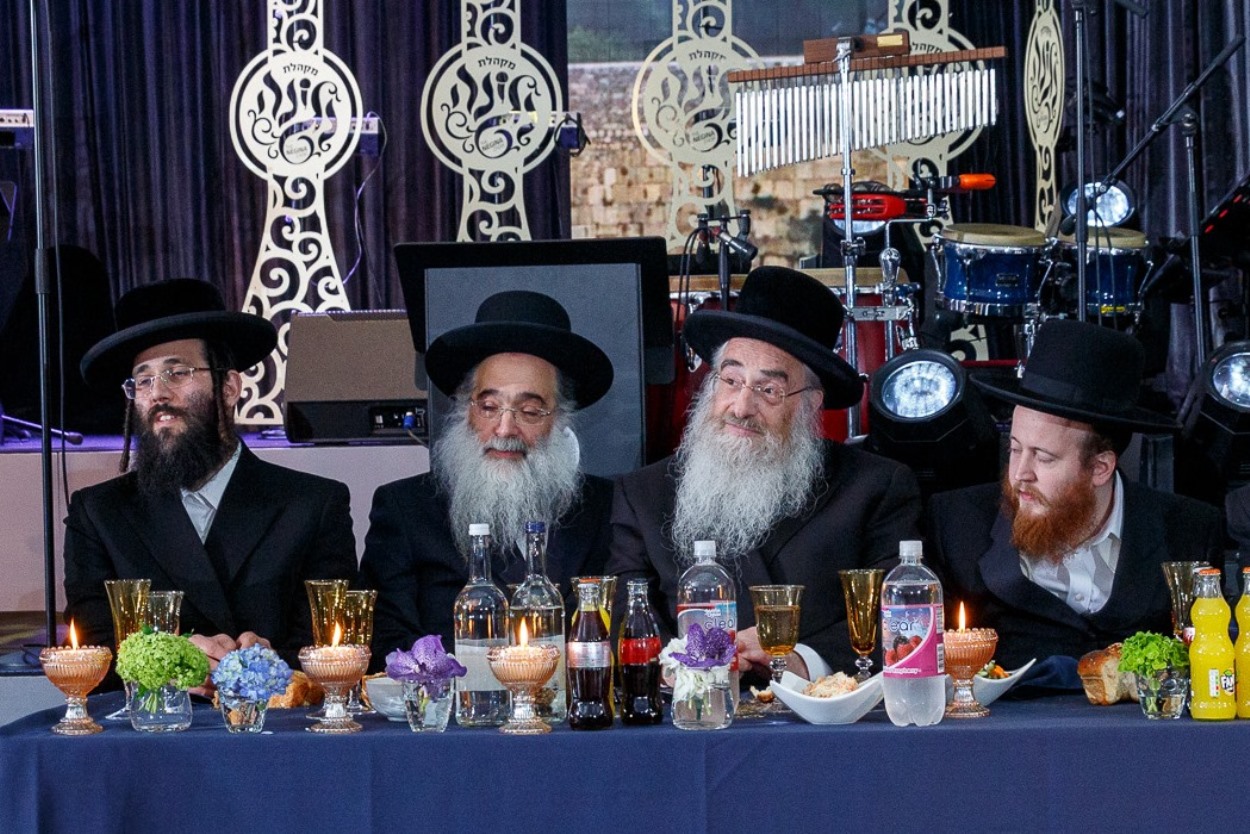 Maranan Hageonim, Sar Hatorah, Harav Chaim Kanievsky, zy”o, and Harav Gershon Edelstein, shlit”a, Ponevez Rosh Yeshiva, declared that the Shas Yiden Kollel Network has brought about a revolution in Torah learning – that mastering the entire Shas is an achievable goal for many and that the Shas Yiden avreichim geonim are true Shas Yiden.

It was so appropriate that in the City of Royalty, London, there should be a distinguished and exciting gathering honoring true Jewish Malchus(royalty). Recently, the Yesodei Hatorah Hall in Stamford Hill was bedecked in finery fit for a monarch accompanied by courtiers and an entourage of nobility. The royalty that night was the Talmud, and the courtiers were 16 avreichim geonim (outstanding young Torah scholars) of Shas Yiden, the internationally acclaimed network of unique Kollelim across Israel and in the UK. Each of these scholars was celebrating a siyum (conclusion) of the study of the Talmud in its entirety.

This gathering of pomp, circumstance and dignity celebrated the glory and wisdom of the Torah. The nobles present were Rabbis, Dayonim, and Rosh Yeshivos from the UK, as well as special guests – leading talmidei chachomim from Eretz Yisroel. The décor, banquet ‘fit for a king’ and the music, were unquestionably an inspiration to all present. This night was the first collective celebration of the London branch of Shas Yiden, which has been acclaimed as the first Torah network of its kind ever. Each of its scholars completes the study of the Talmud from beginning to end, annually!

London has never experienced such a Torah gathering, and hundreds kept arriving at the Yesodei Hatorah hall to be part of this experience.

Over the centuries, the Torah, its wisdom, its study and laws have been the mainstay of the Jewish people. Its talmidei chachomim were always our leaders and guides. The central compendium of thought and law – the Talmud – is made up of some 1000 years of unbroken scholarship, comprising the Mishna and Gemara, followed by another 14 centuries of uninterrupted scholarship and commentary until the present day.

For centuries, the yeshiva world focused on certain tractates and others, due to the Exile and Dispersion of Jews throughout the world, were neglected, especially those sections of Kodshim and Taharos. Early in the 20th Century, the holy Chofetz Chaim rekindled great interest in the study of Kodshim, and towards the end of the 20th Century, Maran Hagaon Harav Michel Yehuda Lefkowitz, zy”o, revived the study of Taharos.

However, another dimension of Torah scholarship was still missing. Namely, the consolidation of all the branches of Talmud study as one totality. A Talmid chochom who was able to do so and developed a thorough knowledge of the entire Talmud was known by the honorific of a Shas Yid, but such scholarship was a rarity.

In 2009, the Pozna Rov, Hagaon Harav Avrohom Eisen, shlit”a, of Flatbush, NY, had a vision of establishing a kollel in Eretz Yisroel, where each avreich  would commit to an intense regimen of completing the entire Talmud, annually, and would work to mastering it all by heart. Based on future success, other branches of Shas Yiden would be opened. Those hearing of this vision were inclined to scoff, and said that such a concept was flawed, and that never in the history of Torah study has such a comprehensive program been attempted, let alone achieved.

Undaunted, Rav Eisen persevered and Shas Yiden began in Bet Shemesh with 6 avreichim. Gradually the number of avreichim increased. First a minyan, then the numbers increased to 2 minyanim! The Sar Hatorah, ‘Rav Chaim’, was asked to test their mettle, and he became enthused about the project. Year after year he tested them and then gave his blessing to establish more such kollelim. In June 2018, with the establishment of Shas Yiden–Yerushalayim, the 3rd kollel, ‘Rav Chaim’ agreed to serve as the Nasi of the Shas Yiden Network. In the space of just 13 years, there are now 6 Shas Yiden Kollelim with 98 avreichim geonim, with a kollel in London, UK. The incredible success of Shas Yiden has been acclaimed by the Gedolei Torah across the Yeshiva World and Torah spectrum – Ashkenazim, Sefardim and Chassidim.

THE TOUGHEST REGIMEN PROVES ITSELF – AGAIN AND AGAIN

The prowess of Shas Yiden as true masters of Talmud has been shown again and again. During the course of a year, 2-4 farhers (public and collective oral examinations) are held. Those most impressed by the all-encompassing knowledge of every page of the entire Talmud have been the examiners themselves. Each is a recognized gaon and leading talmid chochom, and each has been lavish in his praise of the Shas Yiden knowledge, penning letters of approbation.

The Shas Yiden website (www.shasyiden.com) has video recordings of the farhers, which are watched again and again, and are reviewed by Torah scholars and yeshiva students across the world.

Shas Yiden scholars have no vacation. It is a regimen every day of the year, including Shabbos and Yom Tov, and the days before each. The only ‘let-up’ is that the study load on those days is reduced from the daily 45 blatt (9 blatt of Talmud – both sides of the page plus 4 revisions), to 20 blatt (4 blatt plus 4 revisions). The total number of blatt per year is 13,555 each. Every month they undergo a detailed written exam on 225 blatt. There are also no semester breaks.

This remarkable and demanding workload has propelled the Shas Yiden avreichim geonim into the forefront of Talmud learning. Gedolei Torah, among them the mekubal, Maran Hagaon Harav David Abuchatzira saying: “The geulah (redemption) of the Jewish people, rests on the Torah study of Shas Yiden.”

Every year, the Sar Hatorah, Maran Hagaon Chaim Kanievsky, made it his custom to invite the Shas Yiden avreichim to his home and to farher them. Peppering them with questions from all over Shas in increasing complexity, his smile grows broader and broader as each of his questions are answered with precision regarding every source and page number in Shas. So much so is his pleasure at their prowess, at the conclusion of one farher, he exclaimed to the Pozna Rov: “Zei kennen Shas!” (They really know Shas.) During the last few years, the avreichimhave also focused on mastering every Rashi and Tosfos b’al peh (by heart).

‘Rav Chaim’ was represented at the London Siyum Dinner by his long-time chavrusa (daily study partner), Hagaon Harav Yisroel Meir Druk, founder and head of Mosdos Tiferes Yisroel in Yerushalayim and Rishon L’Tzion. He brought a letter from ‘Rav Chaim’ to read out to the gathering. ‘Rav Chaim’ expressed his warm appreciation and regard for Shas Yiden and all its outstanding avreichim. At Shas Yiden-London, “there are incredible talmidei chachomim who toil in the study of Gemara, Rashi and Tosfos in depth, diligence, and constant repetition.” And he ended with a special brocha for the supporters of Shas Yiden: “Praised be they who merit to enter a Yissachar-Zevulun partnership with these kollelim as they will surely merit in the World to Come to be heralded (like the scholars themselves): “Praised be he who enters here accompanied by his Talmud.” (Pesachim 50a)

Rav Druk added that these avreichim were acquiring the fulfilment of man’s purpose in both olam hazeh and olam haba, and praised their daily mesirus nefesh (total commitment). He reserved special words of praise for the wives of the avreichim who enable their husbands to devote virtually every minute to toiling in Torah. Rav Druk added that during his hesped for the late Rebbetzin Batsheva Kanievsky, ‘Rav Chaim’ said: “I promised her that the reward for all my Torah learning, we would split 50-50.”

The main speaker of the evening was Hagaon Hatzadik Yechezkel Shraga Boruch Halberstam, shlit”a, Rav Hatzo’ir of Kiryat Sanz, Netanya. He is the eldest son of the Sanzer Rebbe, shlit”a. A dynamic speaker and incredible talmid chochom, as a rule he does not accept invitations to speak abroad or outside of the Sanz communities. However, he greatly admires and has a warm regard for Shas Yiden, and also knows some of its avreichim geonim personally. He has witnessed the outstanding success of Shas Yiden and he felt it his duty to travel to this historic gathering in honor of the establishment and glorification of Torah scholarship in London.

He not only praised the scholarship of the geonim of Shas Yiden and their diligence, but he extolled their negation of worldly pursuits and total mind-focus on Torah.

The launching of the London Shas Yiden kollel was during the Covid epidemic. Nevertheless, throughout the long months, the avreichimpursued their daunting regimen and completed the same examinations as the Shas Yiden kollelim in Eretz Yisroel – and their results have been stellar.

The siyum itself was conducted by the Viznitzer Rebbe of London who was effusive in his praise of the achievements of Shas Yiden in London. It was significant that all merited to participate in such a gathering in this month of Adar, he said, the month of simcha, celebrating the continuity of Torah by day and by night.

The Dayan, Hagaon Harav Aharon Dovid Dunner, shlit”a, electrified the evening with his stirring words in praise of Shas Yiden. He turned to the avreichim and declared: “You are awakening the jealousy of Torah communities all over!” All those in attendance, or those who will hear of this gathering, will desire to emulate your achievements – to know the entire Shas from beginning to end, and that all the words of the Shas will be on their lips.

The Pozna Rov began the new Shas cycle with the commencement of Brochos. Rav Eisen recounted the beginning and development of Shas Yiden.

As the Pozna Rov concluded his words, the band and assembled choir broke out with songs in honor of the Torah, and the entire hall rose to join in dance and praise. This was a royal London evening to remember. 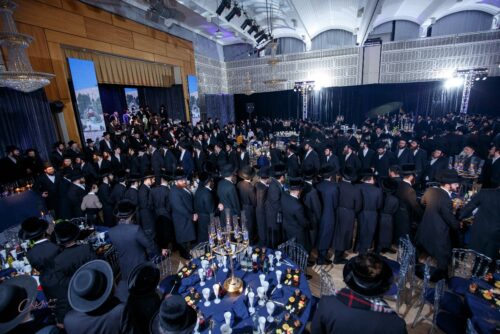 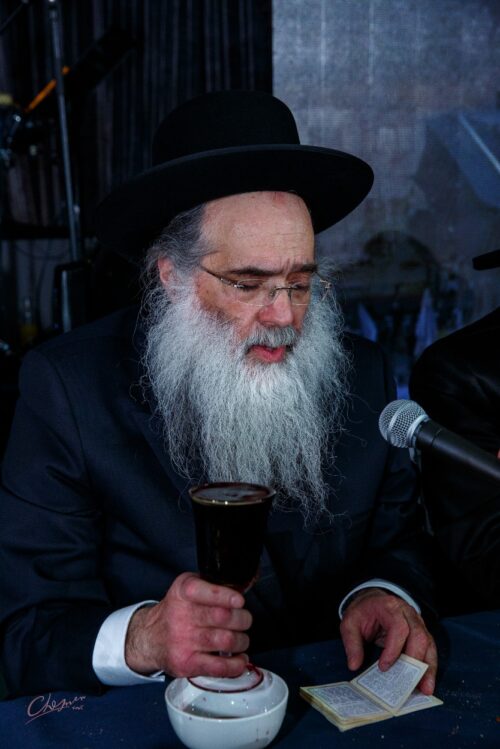 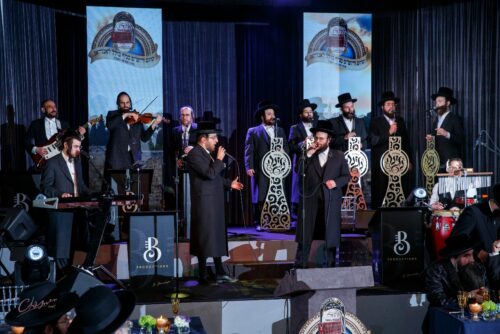 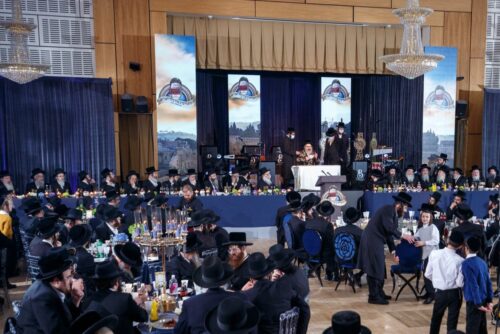 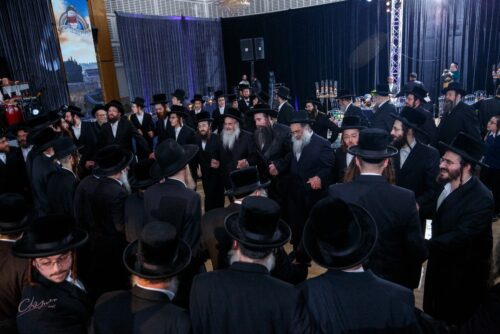 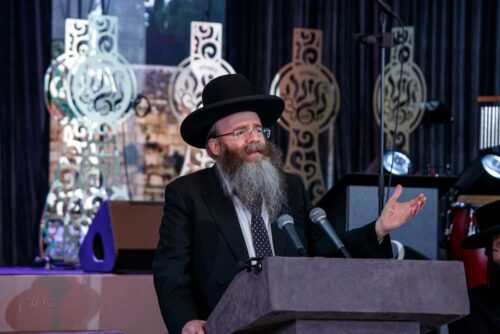 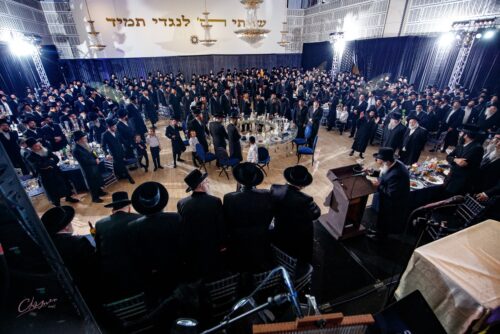 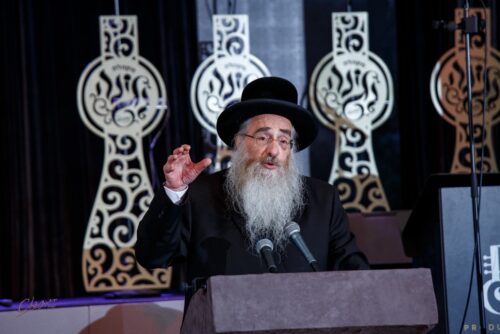 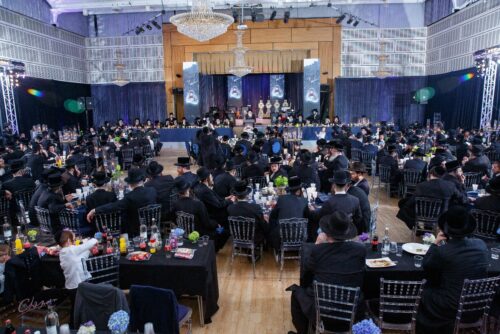 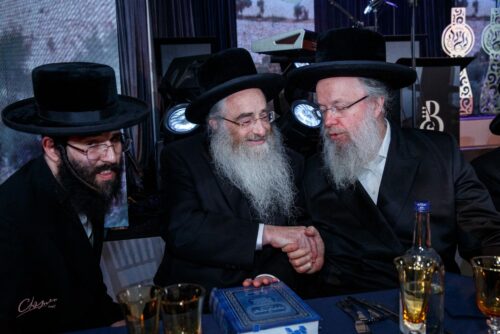 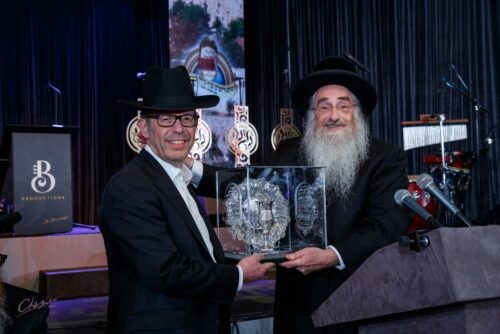 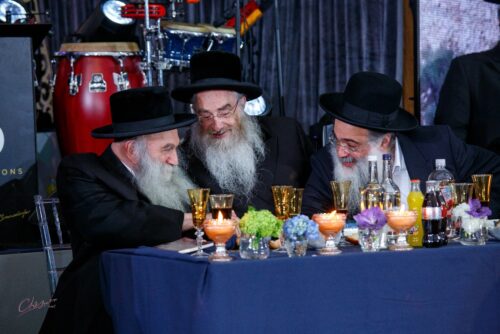 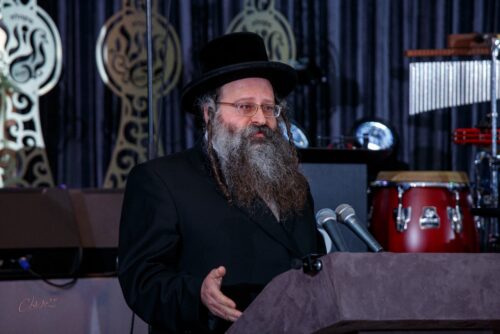 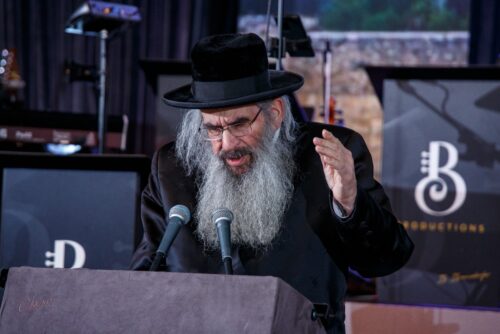 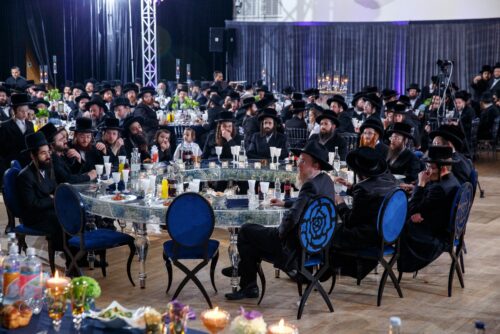 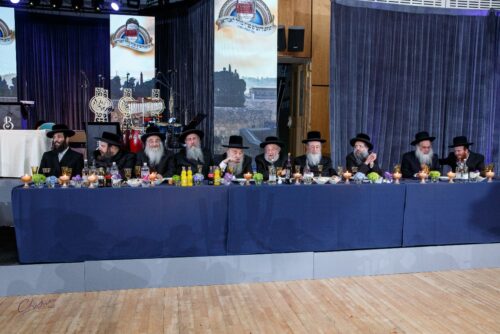 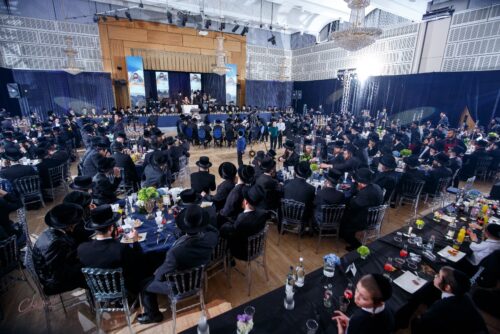 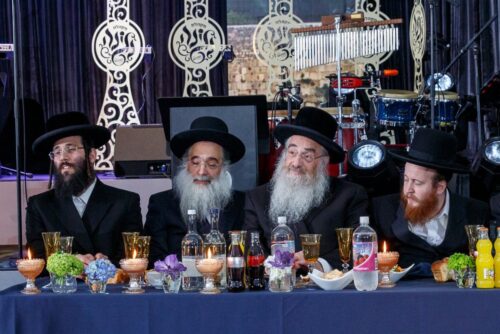 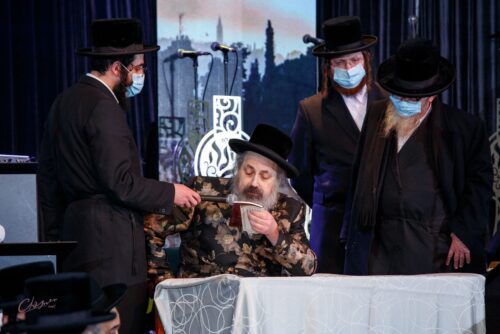 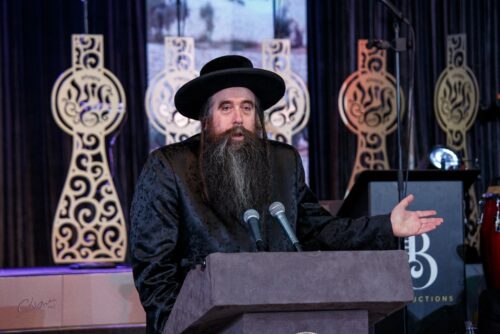 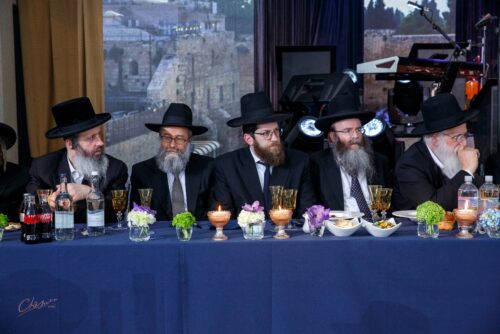