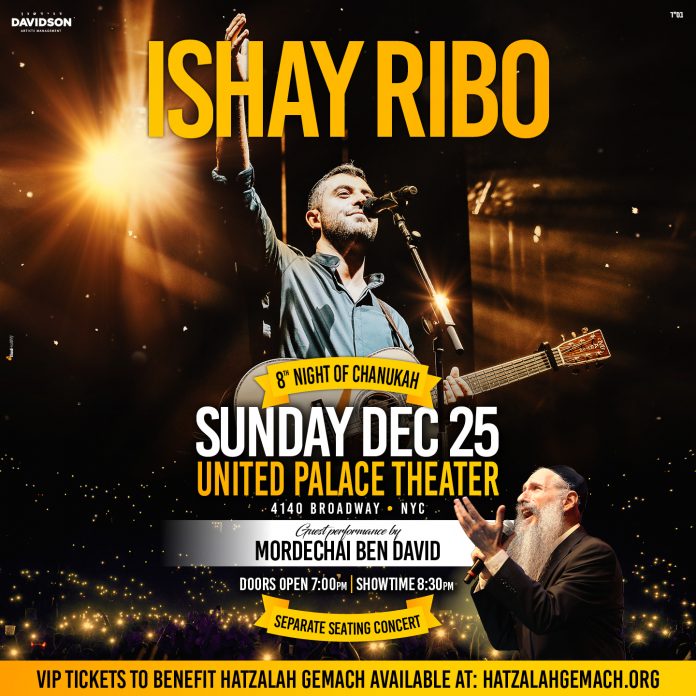 For the first time ever in the states, Ishay Ribo will be hosting a separate seating concert in Washington Heights, This Zos Chanukah (Sunday, December 25th), something that has long been anticipated by the large amounts of Ishay’s fans here in the States who have hoped for an event that accommodates for their needs. As another first, Ribo will be hosting the “king of Jewish music”, Mordechai Ben David, in their first ever joint performance.

The concert follows an event two days earlier – the Chanukah Festival hosted by Chabad of South Board, Florida – where Avraham Fried and Ishay Ribo will be bringing their annual Chanukah show from Israel to the United States.

Event organizer told TLS: “It took a lot of work to find a concert hall that allowed for separate seating, whilst also ensuring that there was roughly an equal amount of seating in both the downstairs auditorium and the balcony, so that both men and women could equally fully enjoy and feel a part of the experience. This was one of our top priorities for this trip, to accommodate for those who want a separate seating arrangement. The upstairs seating actually extends 80% into the main auditorium – so both men and women will be equally close to the stage”.

The venue is centrally located in the tri-state area, close to Monsey and Lakewood and just 45 minutes from Brooklyn, making it convenient for large families with children to attend.

“Many in the Chareidi community are major fans of Ishay Ribo, and at previous shows, in the States, they didn’t feel comfortable attending because of the mixed seating arrangements. We respect that, and we wanted to provide for and cater to that crowd as well. Entrance will also be separate, and Kosher Mehadrin food will be sold at the theater”.

Ribo wrote earlier this week in  a post: “In the spirit of Chanukah, we’ll be lighting the Menorah, and we hope this event will inspire and uplift the crowds in New York. To spread the light of Chanukah, and to end the holiday on a high with music and inspiration and unity.”

Attendees at Ishay’s concerts in the States always sense the high standard of production, unique in many ways to Israeli producers. Ishay will indeed be bringing with him a massive production team from Israel, including 14 musicians.

Tickets have been selling fast as excitement builds up for the event. Tickets are available at Ishay Ribo in New York.

Kosher food will be provided by Sushi Tokyo.