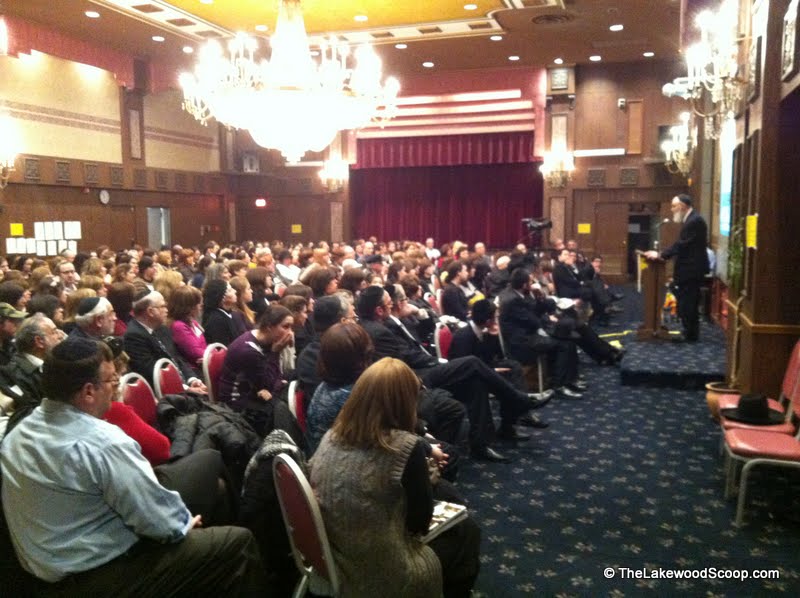 [VIDEO LINK BELOW] Close to 400 Bruriah alumni, fellow faculty and friends came together last night for a memorial held in honor of Mrs. Chaya Newman, A”H, the school’s past principal, who passed away inSeptember. An additional 100 reportedly viewed the proceedings via live streaming through the school’s website.

“Mrs. Newman was the preeminent educator for Jewish girls and is responsible for growing the Jewish Educational Center’s well- known high-school Bruriah High School from a small basement classroom of several students into North America’s most prestigious orthodox institution for girls,” said Adina Abramov JEC’s chief marketing officer. “Her educational system and methods have been copied the world over and as evidenced by the turnout last night and reported viewers from as far away as Israel, her influence is felt in families across the globe.”

Former students met up with classmates who they hadn’t seen in over thirty years, and the alumni in attendance reflected the four+ decades of Mrs. Newman’s service to the school.

Former students came from as far away as West Hempstead, Connecticut and even Chicago. They felt compelled to be there, they said. One alumna, Mimi Kahan (nee Fischman) from the class of 1980 and now from Flatbush shared that her first grandson spoke his first word just that day. “He said Amein!” she said. “If it wasn’t for Mrs. Newman, it would have been “Yo dude” or something like that. She saved me and she saved my family.”

On the program were in order of their appearance: Rabbi Joseph Oratz, Bruriah’s current principal; Rav Elazar Mayer Teitz, Dean of the Jewish Educational Center to which Bruriah belongs; Mrs. Shlomis Peikes, Mrs. Newman’s daughter and current Bruriah Associate Principal; Rabbi Eliyahu Newman, Mrs. Newman’s son and Rosh Yeshiva of the Mir Mesivta in Lakewood; and Hanna Dreyfus, Bruriah alumna class of 2008. There was also a video clip featuring Mrs. Newman in which she expressed her gratification in being able to spend her life in the fashion in which she did – educating the next generation.

Due to the timing of her passing passing, there was no official “shloshim” for Mrs. Newman and last night’s gathering served as an official opportunity for the public to come together and pay tribute.

“Mrs. Newman has done so much for our community,” Abramov said. “Even for those of us who did not get the chance to know her well, our daughters are currently benefitting from the school that she built….Last night was truly a fitting and dignified tribute to a woman who dedicated her life to Jewish education.”