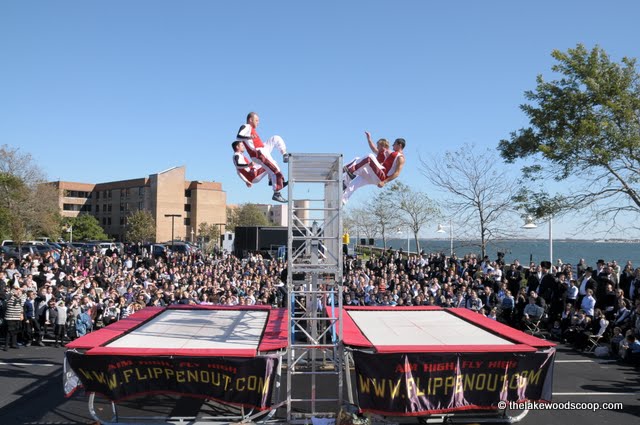 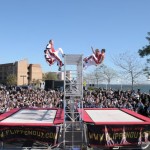 PHOTOS: A dozen coach buses carrying more than 600 yisomim arrived in Manhattan Beach last week Monday, Chol Hamoed. The children traveling on the buses were from across the tri-state area including; Boro Park, the Five Towns, Flatbush, Lakewood, Long Island, Monroe, Monsey, New Square, Queens, and Williamsburg. They came to participate in Misaskim’s chol hamoed sukkos event designed to offer a day of celebration and fun for families who have suffered the loss of a parent. This year’s chol hamoed sukkos outing took place in beautiful Manhattan Beach on nearly 10 oceanfront acres.

The children were treated to a unique array of activities in the morning. A jumbotron screen was set up at the arena and so that the kids could watch several presentations. One of the presentations outlined the daily activities at a Coca Cola bottling facility. The kids learned how Coca Cola glass bottles are made from sand. They saw how Coca Cola’s cans are filled at the astonishing rate of 1,700 cans per minute. Kiddie rides were also set up at the arena to entertain the younger children. Misaskim then arranged a fascinating trampoline show by world-class athletes.

At midday, the families were transported to Boro Park where a 5,500 square foot sukkah was set up specifically for this event. A seudas yom tov prepared by a local caterer was served in the sukkah before everyone assembled for a mega simchas bais hashoevah at the Tiferes Bais Rivkah Hall. A twelve-piece band by Ari Teitlebaum and the Shira Choir performed there along with the popular singer, Shloime Daskal.

“The joy was palpable as the hall reverberated with the intense dancing and singing that lasted for more than three hours”, Misaskim says. Numerous rabbonim joined in the celebration and warmly embraced the children.

The Twins from France arrived at the hall toward the end of the day when the dancing and singing began to wind down. They gave a spectacular performance that elicited an enthusiastic response from the children. The Twins’ performance was followed by a juggling show and the Dancing Dummies, among others.

Before the kids boarded the buses for home, they each received a digital camera complete with all accessories. Children under the age of seven also received a Mitzva Kinder set. These gifts were generously donated by an anonymous philanthropist.

“My children had a wonderful, wonderful time,” one mother shared with a Misaskim volunteer after the event. “You have given them the utmost. I haven’t seen them so uplifted in the last year or so,” she said.

Misaskim coordinates chol hamoed outings twice each year with the assistance of its team of volunteers who devote their time and energy each time to ensure the success of the outing.

“It is with the assistance and support of these individuals that Misaskim remains at the forefront of innovating community services”, Misaskim says.