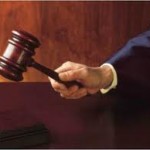 [Video of scene in extended article] A homeless man who fatally shot a New Jersey teenager and wounded the teen’s 16-year-old cousin has been sentenced to 40 years in state prison. Twenty-eight-year-old Jamil Parson must serve 85 percent of the term imposed this month before becoming eligible for parole. He had pleaded guilty in September to numerous charges, including murder and witness tampering.

The teens were walking home from a Lakewood convenience store in December 2009 when Parson forced them into a wooded area. Authorities say he forced them to the ground before shooting them, though Parson claimed the younger teen’s shooting occurred when the youth tried to grab the gun.

Below is raw video footage of the scene of the murder. AP/TLS.