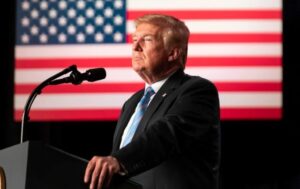 Former President Donald Trump will make his first public appearance since leaving the presidency at the Conservative Political Action Conference (CPAC) on Sunday, February 28th, where he will address the crowd.

According to reports, Trump will talk about the future of the Republican Party and the conservative movement in general, and will attack President Biden’s “disastrous amnesty and border policies.”

Trump, who has been mostly quiet since moving to his residence at his Mar-a-Lago resort in Palm Beach, Florida, hinted in a statement that he would soon be getting involved in politics again.

“Our historic, patriotic and beautiful movement to Make America Great Again has only just begun,” the statement said. “In the months ahead I have much to share with you, and I look forward to continuing our incredible journey together to achieve American greatness for all of our people. There has never been anything like it!”