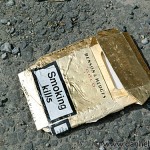 (VIDEO) Heavy smokers who get lung cancer may have tens of thousands of genetic mutations, U.S. researchers said on Wednesday. A team at Roche’s biotechnology unit Genentech in California compared all the genetic changes in a single patient’s lung tumor with healthy tissue from the patient, a 51-year-old man who had smoked an average of 25 cigarettes per day for 15 years before the tumor was removed. What they found were as many as 50,000 genetic mutations. “Fifty thousand is a huge number. No one has ever reported such a high number,” said Zemin Zhang of Genentech, whose findings appear in the journal Nature.

“This is likely associated with the smoking history of the patient. It is very alarming,” Zhang said in a telephone interview.

Smoking is the biggest single cause of lung cancer, and studies suggest mutations occur with each cigarette smoked.

Zhang said the ratio between the number of cigarettes the person smoked before his tumor was removed and the number of mutations in the tumor suggest that for every three cigarettes he smoked, one genetic mutation occurred.

“It’s a lot more complicated than that,” Zhang said, noting that there are DNA repair mechanisms in the body that help protect against the damage of smoking, but these become less efficient over time.

The findings may be sobering for those contemplating taking up smoking. “If you imagine over a lifetime you are going to develop this many mutations in the genome, some people may think twice about it,” he said.

The study was made possible by advances in gene sequencing technology that allows researchers to look at entire genomes, rather than searching for a handful of genes that appear to be especially important in certain cancers.

This new way of studying cancer is painting a much more complex picture of the disease.

For example, the team discovered areas of the genome needed to make proteins — which are important for cell survival — had far lower rates of mutations, suggesting these areas are better protected, Zhang said.

But he noted the findings only reflect one man’s genome. “Obviously, we’d love to have multiple fully sequenced genomes in multiple tumors,” he said.

However, it already offers a much broader view of the genetic changes in lung cancer.

The price of sequencing an entire genome is falling rapidly. The latest machines from companies like Illumina and Life Technologies Corp can map out a patient’s entire DNA code for as little as $5,000 [ID:nN26244408].

Many companies are developing machines that can do the job for $1,000.

Zhang said his team worked with a private company called Complete Genomics in Mountain View, California. “I think this provides a preview of what whole genome sequencing can tell us about the cancer genome,” he said. PLEASE NOTE: Video contains graphic images. Reuters