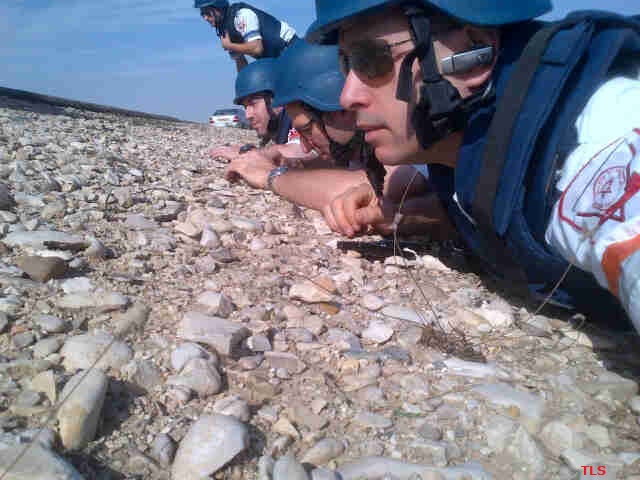 PHOTO: This photo says it all. These HEART Team members – stationed and assisting MDA in the South, have been responding to the scenes of rocket attacks since their arrival, and take cover when the sirens sound.

Today alone, over 80 rockets have poured down on Israel, some making direct hits on homes and leaving civilians injured. The heaviest rocket attacks were reported in Ashdod and nearby villages, but two rockets aimed at Yerushalayim, both exploded just outside the border in open fields.

HEART Team members have already treated dozens of patients for injuries sustained in rocket attacks, vehicle rollovers and other life-threatening emergencies – all while placing their own lives on the line.

“The situation in the South has been trying, tense and at many times uncertain”, a HEART Team member tells TLS.

In the last hour, the HEART Team was dispatched to at least two rocket attacks, with multiple injuries.

BRAVO Team, consisting of 6 members from Miami and NY, departed JFK last night and arrived safely in Israel today. After a drive to the Sderot MDA station, they were extensively briefed by MDA personnel and outfitted with safety equipment and communication devices.

The Belgium HEART contingency stationed in Sderot completed their shift and have traveled back to Belgium.

“We continue to be overwhelmed by the graciousness and total hospitality of Mati Goldstein and MDA and this mission has completely enhanced and strengthened the excellent relationship and partnership HEART has enjoyed with MDA over the last decade”, the HEART member says.

Meanwhile, a Cease-fire has still not been finzalized, but IDF Air Strikes have been noticably fewer – despite no show of slowing of rocket-attacks on civilians.

Tanks and Soldiers are still stationed at the Gaza border awaiting orders. TLS.