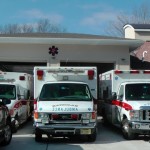 If you’re driving up or down Central Avenue, use extra caution when approaching the intersection of New Central, as the traffic light is now functional. The light however, has a unique exception. Several months ago, the County opted to place a light at the intersection of these two roads which cross right near the new Hatzolah garage, which would essentially make things more difficult for the Ambulances.

However, the County, realizing Hatzolah’s needs, offered to give Hatzolah control of the light in case of an emergency, the Lakewood Shopper reported. This is accomplished by running a wire directly from the light to the Hatzolah building, which Hatzolah will utilize when an ambulance needs to leave and proceed down Central Avenue. The goal is that when the ambulance reaches the intersection, the light will already be in its favor.

In other communities, emergency services are sometimes outfitted with the OpticomTraffic signal preemption system. This is a type of system that allows the normal operation of traffic lights to be preempted to assist emergency vehicles usually via some sort of on board tag or device. This device is turned on and off as needed by emergency workers. However, such a system is cost prohibitive, especially in a town like Lakewood which has many lights. TLS/Lakewood Shopper.