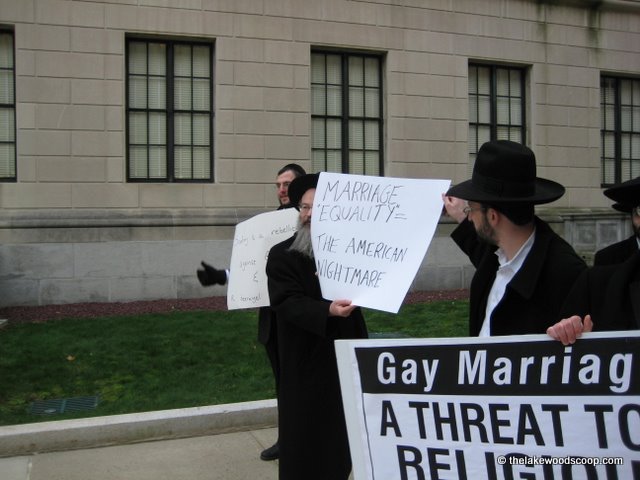 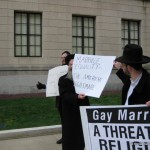 PHOTOS (in extended article) of Harav Simcha Bunim Cohen Shlita, Rov of Ateres Yeshaya and grandson of Hagaon Reb Avigdor Miller Zatzal-protesting this past week, at NJ’s Statehouse in Trenton. In a bold move, the Rov Shlita, was joined by close to 40 Yungerleit as well as by R’ Moshe Bresler, (Torah Jews For Decendcy), Roshei Chabura, a Rosh Hakollel and by Rav Binyomin Yudin Shlita, Rov in Fairlawn NJ. After the vote for the marriage bill was postponed-in which many believe may be an effort to regain support-the group from Lakewood took the opportunity to voice their strong opposition to the bill. Rabbi Cohen Shlita-following in the footsteps of his righteous grandfather-can be seen holding a sign which reads ” Marriage Equality=The American Nightmare”.