Halachos for Tisha B’av that falls out on Shabbos 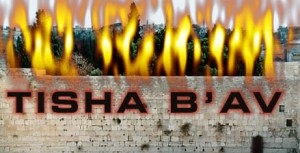 1. On Shabbos from Chatzos, one should only learn things that can be learned on Tisha B’av like Megilas Eicha, Hilchos Tisha B’av, Gemara and Midrashim about the Churban.

2. If someone didn’t finish Shnayim Mikra V’echad Targum he may finish it even after Chatzos.

3. Pirkei Avos is not said on this Shabbos.

4. If someone can’t learn the limudim allowed on Tisha B’av, and that may cause him not to learn at all, he is allowed to learn his regular limudim.

5. One should refrain from taking a walk for pleasure on Shabbos.

6. Shalosh Seudos does not have the usual restrictions of Seuda Ha’mafsekes. One may eat a very lavish Seuda.

7. Shalosh Seudos should not be eaten with a crowd of friends, only with family.

8. If someone is used to eating Shalosh Seudos every Shabbos with his friends in shul, some Poskim say that he is allowed to continue his custom even on this Shabbos.

10. If three people are eating together, they can make a Zimun.

11. After Shkiah one may not eat or drink.

12. On a regular Seuda Ha’mafsekes, if one is planning to eat or drink after bentching one should make a condition before bentching that he is not Mekabel the Ta’anis with his bentching. When Erev Tisha B’av is on Shabbos one does not need to make the condition.

13. The regular Havdalah is not said on Motzei Shabbos.

14. The Bracha of Borei Meorei Ha’aish is said in shul after Ma’ariv before Eicha.

16. A sick person that is allowed to eat on Tisha B’av should remember to make Havdala before he eats.

17. According to a many Poskim, children that eat on Tisha B’av can eat without making Havdala.

18. At the end of Tisha B’av, one should remember to make Havdala. The Havdala is only two Brachos Borei Pri Hagafen and Hamavdil.

19. On a regular year, the Halachos of Aveilus extend until midday of the day after Tisha B’av. This year since Tisha B’av is a Nidcha, one may take a haircut or shower, do laundry, etc on Sunday night.

20. One should refrain on Sunday night from eating meat and drinking wine.

21. The wine of Havdala is an exception and one may drink it. There is no need to give it to a child.