HaGaon Rabbi Boruch Mordechai Ezrachi: The great importance of Agudas Shmita is that it Introduces an Atmosphere of Shmiras Shviis 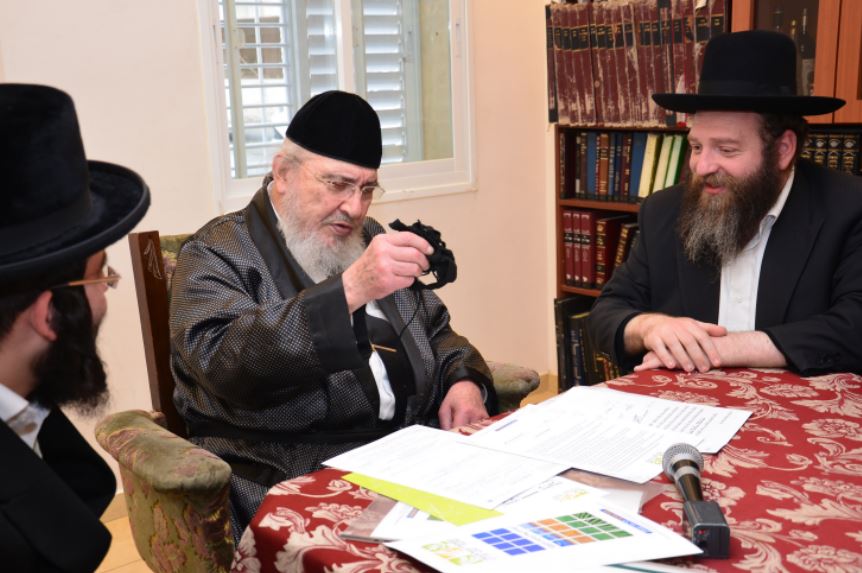 [ADVERTORIAL – VIDEO] The chairmen of The Shmita Association enjoyed an in-depth question and answer session in HaGaon HaGadol Rabbi Boruch Mordechai Ezrachi shlita’s home, while he made in-depth inquiries about the nature of their innovative shmita project. This association gives every Jew, everywhere, the opportunity to personally take part in Shmita observance by allowing them to officially and privately own a plot of agricultural land (recognized by the Israeli Lands Authority aka “Tabu”), and thus be zocheh to all the brachos that are promised to ‘Shomrei Shvi’is’.

When the Rav completed his inquiries as to the strict halachic nature of the association’s kinyonim process and shmiras shmita, he made the following incredible statement: “I wanted to tell you that the importance of this matter, its necessity, is not only the matter itself, which in and of itself is something ‘gevaldig’, giving others the zchus to keep Shmita. Rather, its great importance is that it introduces an atmosphere of ‘Shmiras Shviis’. We become Shviis’People’- ‘People of the Mitzva of Shviis’!”

Indeed, that is precisely the association’s “raison d’etre”- to introduce a real ‘Shmita atmosphere’ in the Jewish nation. Now, thanks to their tremendous efforts, any Jew anywhere can actually halachicly keep shmita- no matter where he or she is! HaRav Ezrachi shlita further enthused: “This is much greater than any other thing! It permeates the entire nation. Am Yisroel is imbued with substance… However, as I said, it’s not only that! It’s the fact that this is being done with great publicity.”

The Shmita Association was established on the eve of this past Shmita (5768) in order to enable each and every Jew to fulfill the mitzva of Shmita kehilchasa by becoming the official private owner of a plot of agricultural land in Eretz Yisroel (recognized by the Israeli Lands Authority aka “Tabu”). The entire kinyonim process and selection of the large plot of land, was and is accompanied by HaGaon HaGadol Rabbi Shmuel Eliezer Shtern shlita, Ga’avad of “Sha’arei Horo’oh” and dayan in Maran Posek HaDor HaGaon Rabbi Shmuel HaLevi Wosner shlita’s court. Legal accompaniment of the project is provided by the Harpaz-Horowitz law firm.

It’s noteworthy that now, as the Shmita year approaches, The Shmita Association’s directors entered the homes of Maranan and Rabanan Gedolei HaDor shlita. Maran the Great Rosh Yeshiva HaGaon Rabbi Aharon Leib Shteinman shlita expressed amazement regarding the initiative and even added his signature to the ‘Kriyas Kodesh’. The directors of The Shmita Association were welcomed with much emotion and excitement in the homes of Gedolei Torah , many of whom requested to be mekayem the mitzva of Shmita kehilchasa for the first time and to personally make a kinyan of a plot of land through the association.

At the conclusion of their meeting with HaRav Ezrachi shlita, he blessed all those who keep shmita through The Shmita Association, “I’m amazed how this idea came about! The idea itself is “ga’onus and tzidkus” combined! And those who support the matter, those who are connected to it In any way at all- may they be blessed- may the blessing promised to shmita observers be showered upon them. And one of Shviis’ important blessings is that on Motzei Shviis we should merit the Geula Shleima, be’ezras Hashem!”

The Shmita Association is now working night and day in order to answer the heavy volume of inquiries being made by Jews worldwide wishing to join Gedolei Torah who have already made their kinyans of a plot of privately owned land in order to be mekayem the mitzva of Shmita in 5775.