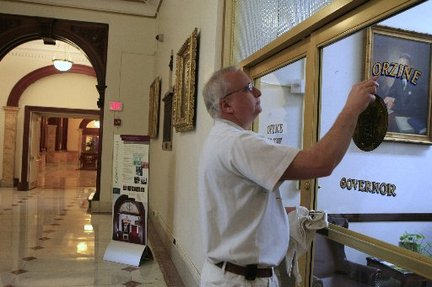 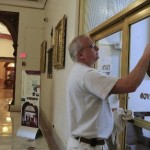 After a late night signing bills and issuing pardons, Gov. Jon Corzine today spent his final hours as chief executive at the Statehouse thanking his staff. As movers carried boxes, oversized chairs and other furniture in and out out of the governor’s office, Corzine greeted aides across the hall in the office of the chief counsel. Corzine’s name was already scraped off the glass doors this morning, to be replaced tonight by Christie’s. Corzine had planned to revive a dormant tradition by leaving a handwritten letter for his successor, wishing Christie the best.

Another lawmaker had the same idea, as Sen. Bill Baroni (R-Mercer) ducked into the governor’s office to leave a note for Bill Stepien.

Corzine walked into his office and thanked tearful secretaries without commenting to reporters. “Take care, everyone,” the governor told his staff, before leaving in a waiting SUV with companion Sharon Elghanayan for the war memorial. (Photo: State employee, Bruce Keck removes the name of former Governor Jon Corzine from the governors office in the Statehouse in Trenton). Star Ledger.