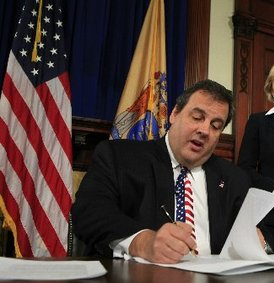 (VIDEO of full inauguration speech in extended article)In the first hours of his term, Gov. Chris Christie today announced the state is $1 billion deeper in the red and signed a series of executive orders that could have sweeping consequences for towns, businesses and labor unions. The text of the eight executive orders was not immediately released, leaving advocates scrambling to interpret the new landscape. Christie said they included fulfilling campaign pledges to halt unfunded mandates on towns, freeze new regulations on business and broaden state pay-to-play prohibitions to limit donations by labor unions — a key Democratic constituency.

Among the other executive orders were steps to make state spending more transparent online, and to ensure casino regulators can continue to work in the event of a state government shutdown — unlike in 2006, when Atlantic City gambling halls were shuttered during a week-long budget dispute.

Christie said he was not laying the groundwork for such gridlock this June, when he will have to agree on a budget with a Democrat-controlled Legislature.

Christie criticized outgoing Gov. Jon Corzine for leaving a “final parting gift” of an undisclosed $1 billion shortfall in the current budget, which runs through June. The Republican said he learned of the deficit at 2 p.m. Tuesday, two hours after he took the oath of office, and would begin to tackle it by meeting with economic advisors on Thursday.

“It’s my responsibility now, not his,” Christie said at a late-morning press conference.

Christie would not say how he would close the gap, other than to rule out raising taxes. He said he would try to implement a Corzine cost-cutting proposal to require school districts with excess surplus to use the money in place of state aid beginning next month.

Christie was harsh on his predecessor, saying Corzine refused to push for legislative approval for the school aid plan while instead signing lesser bills and appointing allies to state posts during his final days in office. Corzine has defended his actions to leave Christie a balanced budget with a surplus. Star Ledger.