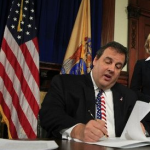 Gov. Chris Christie has signed 14 executive orders in his first 23 days in office, including Thursday’s “state of fiscal emergency” declaration seizing control to shrink the current state budget, according to the official New Jersey web site. By comparison, former Gov. Jon Corzine issued three executive orders during the same time period, according to the website, and 167 total during his four-year term. Former Gov. Jim McGreevey issued five executive orders in his first 30 days, while former Gov. Christie Todd Whitman issued eight in her first 30 days. In an executive order and speech to both houses of the Legislature, Christie said he would close a $2.2 billion budget hole, saying New Jersey is on “the edge of bankruptcy.” He revoked funds from local school districts, hospitals and NJ Transit and declared a “state of fiscal emergency,” forcing more than 500 school districts to spend their surpluses in place of state aid.

Christie’s other executive orders include creating a seven-member commission to review the way gaming, sports and entertainment are overseen in New Jersey and freezing nearly all actions of the state’s affordable housing board. Star Ledger.