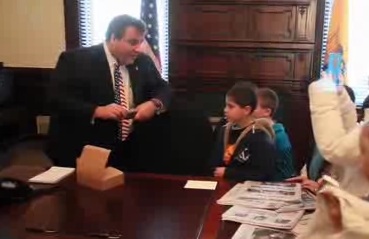 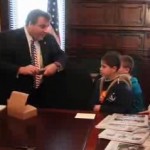 (VIDEO in extended article of Christie’s first full day in office). Gov. Chris Christie began his term today by testing the limits of his power, issuing an executive order curbing political donations by labor unions that Democrats and union leaders insisted would not withstand legal challenges. The executive order was one of eight signed by the Republican governor as he used his first full day to live up to campaign promises, settle scores and lay down markers of authority. Christie also tore into former Gov. Jon Corzine for leaving a “final parting gift” of an undisclosed $1 billion shortfall in the current state budget — a claim disputed by Corzine.

Christie said the executive orders will spur economic growth by halting unfunded mandates on towns and freezing “non-essential” rules and regulations that hamper businesses. Others would make state spending more transparent online and ensure casino regulators can continue to work in the event of a state government shutdown — unlike in 2006, when Atlantic City gambling halls were shuttered during a week-long budget dispute.

Christie said he was not laying the groundwork for such gridlock this June, when he will have to agree on a budget with a Democrat-controlled Legislature.

But his Executive Order No. 7 — broadening campaign finance rules to limit donations by labor unions that have state contracts — drew immediate objections from Democrats. Organized labor, a traditional Democratic constituency, worked feverishly against Christie during the campaign.

“This will cut the legs out of Democratic fundraising. It will not go unchallenged and it will not stand,” said Sen. Raymond Lesniak (D-Union), a prolific fundraiser. “It’s clearly an unconstitutional violation of free speech rights of working men and women of New Jersey.”

Bob Master, a spokesman for the largest state workers union, the Communications Workers of America, also called the order “unconstitutional.”

“I don’t know what his motivation is. It seems to me to be way, way over the top,” Master said. “I just don’t see how it withstands legal muster.”

Christie said he was simply bringing unions in line with other “business entities,” such as law and engineering firms that have state contracts worth more than $17,500. Those businesses are barred from donating more than $300 to statewide campaigns, but freer to give in local races.

“It’s been unfair to the state of New Jersey to have one set of people who do business with the state be able to continue to contribute to campaigns, while another group of people can’t,” Christie said. “The idea of pay-to-play (reform) is to level the playing field.”

Towns and taxpayers will welcome the relief from requirements, said William Dressel, executive director of the state League of Municipalities. “The governor has clearly declared war on unfunded mandates,” said Dressel, who called them “a major cost driver on property taxes.”

But environmentalists said Christie — under the guise of promoting business growth and eliminating “red tape” — could harm preservation efforts across the state.