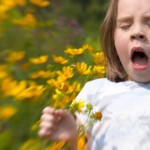 The rise in temperatures associated with climate change might have an unexpected consequence: more allergies among more people. New research from Italy suggests that higher temperatures are lengthening the pollen season for some plants and trees, increasing the pollen load they produce and causing a rise in the number of people who are developing allergies to certain pollens. “The increase of global radiation determines an advance (of pollen season) and an increased period of exposure to the pollens,” said study author Dr. Renato Ariano, director of the allergy service at Bordighera Hospital in Italy. Ariano said the increased exposure to pollen can cause more people who are susceptible to allergy to actually develop pollen allergies.

Ariano was scheduled to present the findings Monday in New Orleans at the annual meeting of the American Academy of Allergy, Asthma & Immunology.

For nearly 30 years, Ariano and his colleagues have been recording pollen counts, the length of pollen seasons and the prevalence of people sensitized to five major pollens in the Bordighera region of Italy — birch, cypress, olive, grass and parietaria, a common plant in that region.

The Bordighera region is in western Liguria, on the Mediterranean Sea at the border of Italy and France, said study author Dr. Giovanni Passalacqua, an assistant professor of allergy and respiratory diseases at Genoa University in Italy. Bordighera “has a very mild Mediterranean climate and is surrounded by a rural landscape where flowers and olives are cultivated,” he said.

At the same time, the researchers also tested area residents, using skin prick testing to assess the levels of sensitization to the five pollens. If someone reacts on a skin prick test, they’re said to be sensitized to that substance. However, being sensitized to a substance in an allergy test doesn’t always translate to noticeable symptoms, though there’s often a correlation between the two.

Estelle Levetin, a professor of biology who chairs the biological sciences faculty at the University of Tulsa in Oklahoma said that “the data already show that pollen seasons could be longer and pollen levels could be higher, and although this needs more study, it may be that the pollen grain is becoming more allergenic when plants are grown with higher carbon dioxide levels.”

This means that people with allergies might need to start taking allergy medications earlier and continue them for a longer period of time, Levetin said. Anyone who feels that their allergies are starting earlier should discuss this with their doctor, she said. APP