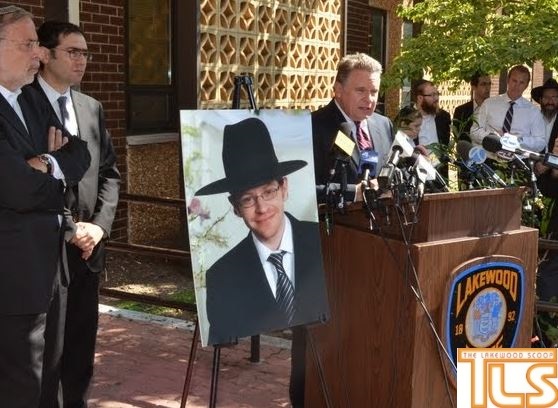 Amid growing concerns over the fate of Aaron Sofer, an American citizen who went missing in Israel on Friday afternoon, a press conference was held today in Aaron’s hometown, Lakewood.

Aaron Sofer, 23, is studying in a yeshiva in Israel. While walking with a friend on Friday in the Jerusalem Forest, the two lost contact with each other and Aaron never emerged from the forest. A massive search has been underway since then, yielding no results.

Tuesday marks the fourth day since his disappearance, with the prospects of his safe return growing slimmer with passing time. The conference took place on the steps of Lakewood’s Town Hall and was attended by dozens of members of the media and of the Sofer family and addressed by numerous state and local elected officials.

With the world-famous Lakewood Yeshivah on its final day of summer break hundreds of students and community members attended the conference as well, to show their support and solidarity for Aaron and the Sofer family. As the crowds swelled and the heat intensified, a number of young yeshivah men circulated among the reporters, handing out water bottles.

Lakewood Mayor Menashe Miller spoke first, apprising the audience of the circumstances surrounding Aaron’s disappearance. He expressed solidarity with the missing boy and thanked the agencies involved in the search.

Lakewood Township Committeeman and Emergency Services Liaison Meir Lichtenstein read aloud a prepared statement from the parents of Aaron, Rabbi and Mrs. Moshe Tzvi and Chulda Sofer, who flew to Israel as soon as they were able, to be on the front lines of the search for their missing son.

“We would like to thank everyone for the united effort expended for Aaron’s return,” read the statement.

Some of the agencies and organizations the Sofers thanked included: “the US Ambassadors, consulate general, Members of Knesset, Zakah, United Hatzalah and especially the Israeli police who are coordinating and expending countless hours on the search.”

In terms of U.S. officials involved, the Sofers thanked Senators Menendez and Booker, Congressman Smith and staff, the US State Department, the FBI, the Israeli consulate and more.

The prepared statement concluded with an appeal for the United States government to throw the full weight of their support and resources behind the search and asked for the community’s continued support and prayer.

New Jersey Congressman Chris Smith spoke poignantly of the suffering Aaron’s parents and extended family are currently undergoing and expressed the possible concern that the boy may have been abducted. Smith mentioned the letter he had written to Secretary of State John Kerry exhorting him to take every measure necessary to find the missing American citizen. The Congressman also mentioned the thousands of volunteers in Israel who farmed out in search of Aaron.

State Senator Robert Singer, representative of the 31st legislative district of which Lakewood is a part, took to the podium and assured the family that no stone will be left unturned in the search for their beloved Aaron.

Ocean County Freeholder Gerry Little said, “We are united with the Lakewood community to lend our prayers and support to Aaron and his famiy and to continue to urge the United States officials and the Israeli officials to do everything they can to find Aaron.”

He was followed by Freeholder Director Joseph Vicari, who declared his support for the family as he proclaimed, “The message must be loud and clear: never ever should this happen again. This is no time for excuses; we need a strong commitment from our government that this will stop and will never ever happen again.”

While US Senator Robert Menendez (D-NJ) couldn’t attend, a representative from his office read aloud a written statement from the Senator. “By all accounts, Aaron is a devout and dedicated student, who traveled to Israel to enhance his knowledge and deepen his understanding of sacred Jewish texts… Ever since I was notified that Aaron went missing in Israel, my office has worked very closely with the State Department, U.S. Embassy and Consular officials in Israel, and the Israeli Embacy in Washington, D.C… We keep Aaron and his family in our thoughts and prayers,” the statement read in part.

New York Assemblyman Dov Hikind traveled in from Brooklyn and passionately expressed his pain for the family and his message to the Israeli government to “treat Aaron as if he is an Israeli soldier missing!”

“As a father and grandfather, I can only imagine what it is like for the Sofer family as their brother has disappeared. It’s been four days already and we are very, very concerned. Time is of the essence and every hour that goes by is reason for greater concern.”

A representative and close friend of the family, Rabbi Yisroel Tzvi Serebrowski, a rabbi in Cherry Hill, NJ, spoke on behalf of the Sofers, describing the pain and anguish they are currently enduring.

He finished by appealing to the members of the media to tell this story and to tell it well, with a compassionate human touch as dealing with a real person and a real and suffering family.

Though the family members present were reluctant to speak to the media, two brothers and a brother-in-law did deliver brief remarks, pleading with anyone who had the wherewithal to “bring back our brother!”

As the conference concluded, Mayor Miller thanked all in attendance for their support and announced the launching of a website dedicated to raising funds for the urgent search: www.searchforsofer.com. Tens of thousands of dollars are poured into the search every day, as the government, the family and the many, many volunteers spare no effort to ensure the safe return of Aaron Sofer. Organizers are hoping for a generous outpouring of donations to help them move forward in the search and to set up a reward for information that will lead to Aaron’s return.