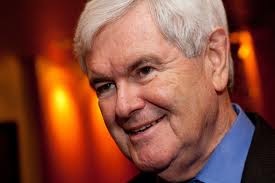 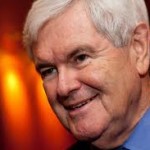 Continuing a Primary Season Series By: Aaron Joseph. As the political season gains steam it is this author’s intent to bring forth in the next weeks an unbiased and factual mini biography on the relevant players, amongst other pieces. From the most dynamic Speakers of The House in recent U.S. history, to a creative, entrepreneurial success, Newt possesses a glib, effortless and instantaneous command of relevant facts and then some in most any given arena. Newt is a powerhouse of a public servant. Named Newton Leroy McPherson at birth, Newton Leroy “Newt” Gingrich is a voluminous, vibrantly colorful and gripping saga that would even entertain the entertained.

In 1961, Newt graduated from Baker High School in Columbus, Georgia. During his teen years he lived in Orléans, France where his political interests were sparked.

Attending a private, religious research university in Atlanta, Georgia called Emory University from which he earned a B.A. in history in 1965, and a M.A. in 1968, Newt went on to receive his Ph.D. from Tulane University in New Orleans, Louisiana during 1971.

For a while after graduating, Newt taught college history, while unsuccessfully running for a seat in the U.S. Congress. In his first bid for office during 1974, a bad year for Republicans because of Nixon’s resignation and the Watergate scandal, Newt nearly defeated Democrat Jack Flynt, a 20-year incumbent, losing by only 2,770 votes.

CONGRESS:
In November, 1978 at the age of 35 he won his first of many elections and the following January, was duly sworn in to his seat as the representative from Georgia’s 6th congressional district. Newt held this post until he resigned 20 years later after being cleared by a congressional ethics committee.

Possessing significant leadership skills, Newt’s time in congress can attest to the many bills he sponsored or helped legislate. Early on in his Tenure, Newt co-founded the Congressional Military Reform Caucus (MRC) as well as the Congressional Aviation and Space Caucus. He also supported a proposal to ban loans from the International Monetary Fund to Communist countries and he endorsed a bill to make Martin Luther King, Jr.’s birthday a national holiday

In March 1989, Gingrich became the House Minority Whip This was Gingrich’s first formal position of power within the Republican party During his time in this position he railed against what he and other Republican’s saw as ethical lapses under Democratic control for almost 40 years

During the 1994 mid-term election season, Newt and several other Republicans came up with a Contract with America, many policies that Republicans promised to accomplish in the new Congress. Issues such as welfare reform, term limits, tougher crime laws, and a balanced budget law, and many others were in the workings.

That November, Republicans gained 54 seats and took control of the House for the first time since 1954. Newt was credited and he became the Speaker of The House.

Within the first 100 days of the new congress Newt’s “Contract With America” was fulfilled and the House passed his bills. In 1996, the Republican majority in congress was re-elected. During his remaining time as Speaker of The House, many significant Bills were passed including the Personal Responsibility and Work Opportunity Reconciliation Act, which was intended to reconstruct the welfare system.

A key aspect of the Contract with America was the promise of a balanced federal budget President Clinton signed the budget legislation in August 1997. At the signing, Gingrich gave credit to ordinary Americans stating, “It was their political will that brought the two parties together.” In early 1998, with the economy performing better than expected, increased tax revenues helped reduce the federal budget deficit to below $25 billion. Gingrich then called upon President Clinton to submit a balanced budget for 1999—three years ahead of schedule—which Clinton did, making it the first time the federal budget had been balanced since 1969

During 1997 President Clinton signed into effect the Taxpayer Relief Act of 1997, which included the largest capital gains tax cut in U.S. history Gingrich has been credited with creating the agenda for the reduction in capital gains tax, especially in the “Contract with America”

Eighty-four ethics charges were filed against Speaker Gingrich during his term in office. Following an investigation by the House Ethics Committee Gingrich was sanctioned US$300,000 In 1999, the IRS cleared Newt’sorganizations connected with the “Renewing American Civilization” courses under investigation for possible tax violations.

On November 5, 1998 only a day after being elected to an 11th term from his district, Newt announced that he would not only stand down as Speaker, but would leave the House as well. Newt said, “I’m willing to lead but I’m not willing to preside over people who are cannibals. My only fear would be that if I tried to stay, it would just overshadow whoever my successor is.”

POST CONGRESS:
Gingrich has since remained involved in and comments upon national politics and is highly involved in many public policy debates, especially on issues regarding healthcare, national security, and fighting for recognition of the role of religion in American public life.


A FEW QUICK FACTS:
*Is a dinosaur enthusiast
*Has authored 18 books
*Was married 3 times
*Advocates space exploration
*Writes book reviews for Amazon.com
*Believes that the United States has become too secular
* Favors a strong immigration border policy and a guest worker program
* Identified education as “the number one factor in our future prosperity”

To read more about the views of this most interesting public figure it would be worthwhile to read two of his books:

1) “Rediscovering God in America”, in which Newt writes that the Founding Fathers intended the United States to not only allow, but encourage, public religious expression.

2) To Save America, where Newt espouses his conservative approach.