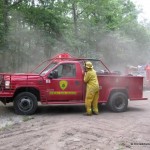 The Forest Fire Service along with the Fire Marshal’s office responded.

Nobody was injured, and the fire was brought under control about 30 minutes later. TLS-6466/TLS-MK.