Experts Say Sitting Too Much At Work, School Could Be Deadly 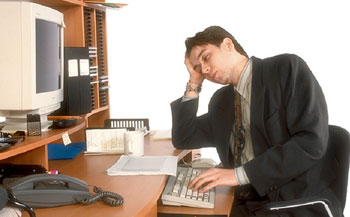 Here’s a new warning from health experts: Sitting is deadly. Scientists are increasingly warning that sitting for prolonged periods — even if you also exercise regularly — could be bad for your health. And it doesn’t matter where the sitting takes place — at the office, at school, in the car or before a computer or TV — just the overall number of hours it occurs. Research is preliminary, but several studies suggest people who spend most of their days sitting are more likely to be fat, have a heart attack or even die.

In an editorial published this week in the British Journal of Sports Medicine, Elin
Ekblom-Bak of the Swedish School of Sport and Health Sciences suggested that authorities rethink how they define physical activity to highlight the dangers of sitting.

While health officials have issued guidelines recommending minimum amounts of physical activity, they haven’t suggested people try to limit how much time they spend in a seated position.

“After four hours of sitting, the body starts to send harmful signals,” Ekblom-Bak
said. She explained that genes regulating the amount of glucose and fat in the body
start to shut down.

That wasn’t welcome news for Aytekin Can, 31, who works at a London financial
company, and spends most of his days sitting in front of a computer. Several evenings a week, Can also teaches jiu jitsu, a Japanese martial art involving wrestling, and also does Thai boxing.

“I’m sure there are some detrimental effects of staying still for too long, but I
hope that being active when I can helps,” he said. “I wouldn’t want to think the
sitting could be that dangerous.” Read full article in APP.